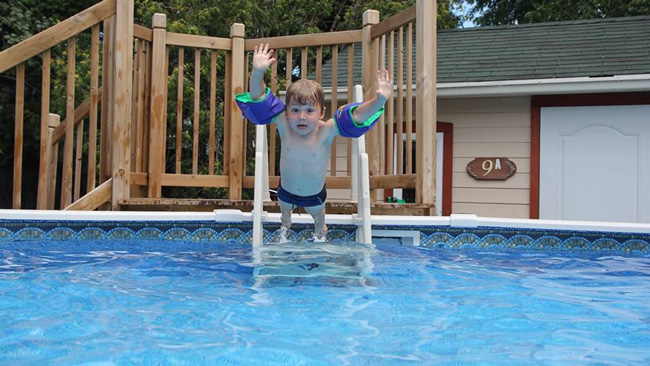 Could a cheap molecule used to disinfect swimming pools provide the key to creating a new form of DNA nanomaterials?

Cyanuric acid is commonly used to stabilize chlorine in backyard pools; it binds to free chlorine and releases it slowly in the water. But McGill researchers have now discovered that this same small, inexpensive molecule can also be used to coax DNA into forming a brand new structure: instead of forming the familiar double helix, DNA’s nucleobases – which normally form rungs in the DNA ladder – associate with cyanuric acid molecules to form a triple helix.

The discovery “demonstrates a fundamentally new way to make DNA assemblies,” says Hanadi Sleiman, Canada Research Chair in DNA Nanoscience at McGill and senior author of the study, published in Nature Chemistry. “This concept may apply to many other molecules, and the resulting DNA assemblies could have applications in a range of technologies.”

The DNA alphabet, composed of the four letters A, T, G and C, is the underlying code that gives rise to the double helix famously discovered by Watson and Crick more than 60 years ago. The letters, or bases, of DNA can also interact in other ways to form a variety of DNA structures used by scientists in nanotechnology applications – quite apart from DNA’s biological role in living cells.

For years, scientists have sought to develop a larger, designer alphabet of DNA bases that would enable the creation of more DNA structures with unique, new properties. For the most part, however, devising these new molecules has involved costly and complex procedures.

The road to the McGill team’s discovery began some eight years ago, when Sleiman mentioned to others in her lab that cyanuric acid might be worth experimenting with because of its properties. The molecule has three faces with the same binding features as thymine (T in the DNA alphabet), the natural complement to adenine (A). “One of my grad students tried it,” she recalls, “and came back and said he saw fibres” through an atomic force microscope.

The researchers later discovered that these fibres have a unique underlying structure. Cyanuric acid is able to coax strands composed of adenine bases into forming a novel motif in DNA assembly. The adenine and cyanuric acid units associate into flower-like rosettes; these form the cross-section of a triple helix. The strands then combine to form long fibres.

“The nanofibre material formed in this way is easy to access, abundant and highly structured,” says Nicole Avakyan, a PhD student in Sleiman’s lab and first author of the study. “With further development, we can envisage a variety of applications of this material, from medicinal chemistry to tissue engineering and materials science.”