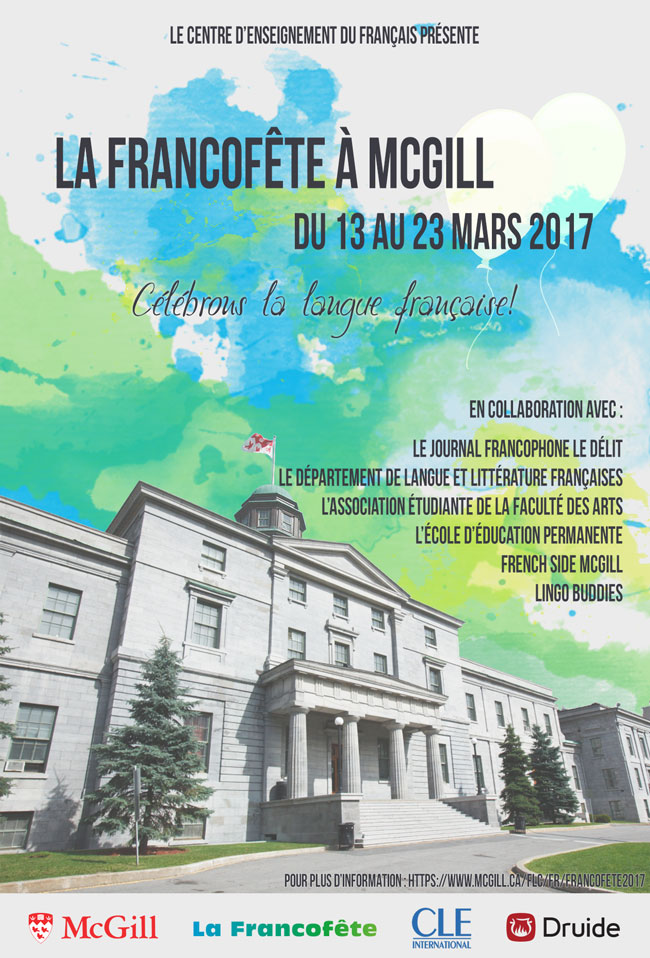 Contests, conversation circles, literary happy hours, francophone music, cultural workshops, a mobile sugar shack … For the next two weeks, the entire campus will come alive for the Francofête. Francophones and Francophiles, students, staff and faculty are all are invited to celebrate McGill’s French side.

Every year, as part of the International Day of the Francophonie, the Office of the French Language (OQLF) organizes a Francofête in March in order to celebrate French language and culture throughout Quebec. Many cultural organizations and educational institutions take part in these celebrations, offering an array of activities that promote French.

In 2016, McGill’s French Language Centre (CEF) organized, in collaboration with Concordia University, the City Race, during which students who have French as a second language explored the city to find clues about Montreal’s cultural and historical sites. This inter-university event was a great success with the students.

French shines at the University

Building on its success over the past year, the CEF has expanded its range of cultural and extracurricular activities for its students and for the larger McGill community. As part of the Francofête 2017, the CEF wanted to bring together key Francophone players from McGill to celebrate the Francophonie at the University, but above all, to highlight several years of collaboration between the various departments and organizations that promote French on campus.

From March 13 to 23, the CEF, McGill’s French-language newspaper Le Délit; the Arts Undergraduate Society; the Department of French Language and Literature, the School of Continuing Studies, the French Side of McGill and McGill International Student Network: Lingo Buddies are joining forces to offer a variety of activities and contests to the McGill community. On the program: creative writing and photography contests, a treasure hunt, workshops on the French language in Quebec, a literary evening, a Rap battle, sugaring off and more. Don’t miss a new edition of Francofête’s City Race on Friday, March 17!

Thanks the generosity of partners like the OQLF, Druide informatique and CLE International, participants have the chance to win everything from cash prizes to Antidote software and French books.

The McGill community is invited to join in on the celebrations by consulting the schedule of events and activities online.