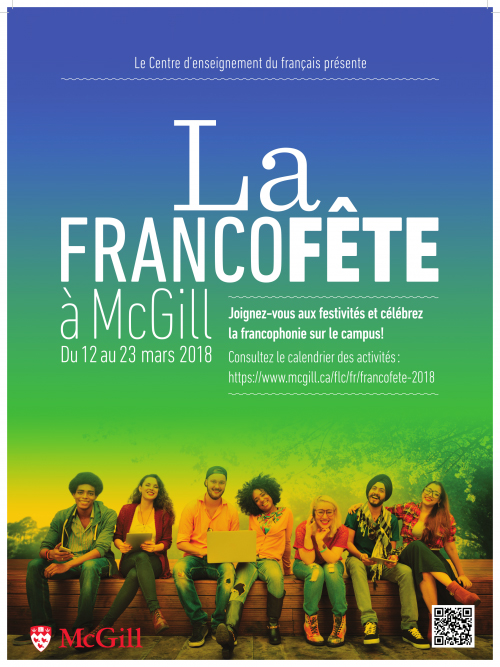 In celebration of the International Day of the Francophonie (March 20), the province comes alive during a two-week festival underlining the importance of the work done by Quebec’s francophone cultural groups and organizations to promote French culture and language.

Last year, the Centre d’enseignement du français (CEF) held the first Francofête à McGill to showcase the collaboration between various departments and organizations that work toward the advancement of French on the campus. That first Francofête included everything from contests and conversation circles, to literary happy hours and cultural workshops.

Based on that success the CEF is back again this year with two weeks of celebrations surrounding the International Day of the Francophonie (March 20), with the help of even more groups and participants.

This year’s Francofête program, from March 12 to 23, features everything from screenings of French-language films and an open mic Karaoke-poetry night, to creative writing and photography contests and workshops on writing poetry and French Wikipedia articles.

The Francofête City Race is back for it’s 3rd edition. The annual downtown rally gives non-francophone McGill students a chance to use clues to discover Montreal’s places, buildings and landmarks.

Francofête participants can win any number of prizes, graciously donated by sponsors that include Druide informatique and CLE International. The Centre d’enseignement du français also thanks the Office québécois de la langue française (OQLF)  for its funding of cultural and educational events.

Get more information about the 2018 Francofête online.