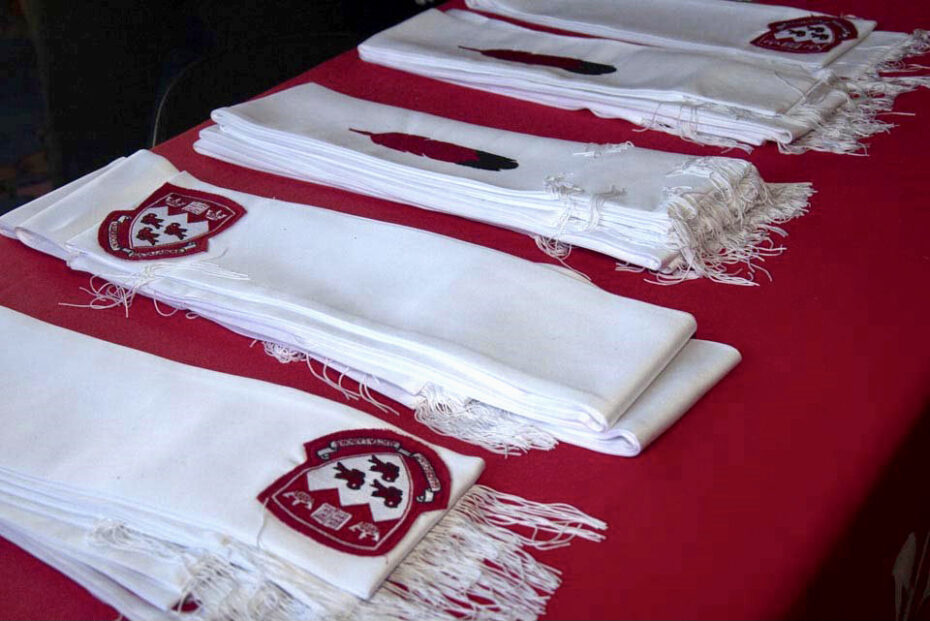 This deep into the COVID-19 pandemic, the bloom is off the Zoom rose for most people.

Which is exactly why yesterday’s virtual Fall 2021 Indigenous Scarf Convocation Ceremony was such a breath of fresh air. Heartfelt smiles, spontaneous applause and more than a few happy tears were shed as people celebrated McGill’s graduating First Nations, Métis and Inuit students at both the undergraduate and graduate levels, from across the University’s Schools and Faculties. Parents and grandparents, cousins and daughters, and McGill faculty and staff, all offered congratulatory messages to the graduating students, while the latter, in turn, praised everyone who had supported them through their journey.

However, as the Master of Ceremony Matthew Matthew Coutu-Moya pointed out, students in B.C. had yet to receive their scarves as the recent heavy rain and flooding has damaged significant infrastructure in the region.

“Our thoughts are with you, your families and your communities,” said Coutu-Moya, Indigenous Access McGill Coordinator, addressing those students directly. “We hope you are safe, happy and healthy.”

Many of the speakers highlighted the dedication of the graduating students and the significance of their academic success.

“I want to congratulate everybody for the work they have done. We are undoing these colonial oppressions, which we know so well in our communities, every time we are advancing in higher education,” said Ben Geboe, a member of the Yankton Sioux Tribe of South Dakota who has just earned a PhD in Philosophy, holding up sage and feathers. “I offer this sage and these feathers from the Black Hills of Dakota to all graduates and your families, and I say ‘Good job’ to you.”

“The special scarf bestowed to you for this occasion highlights your academic journey as an Indigenous student at our University, including your hard work, dedication and perseverance in the face of unusual challenges in the face of the last several months,” said Principal Suzanne Fortier. “Each of you are role models… and we count on you to be ambassadors in helping us bring more Indigenous people to our campuses.”

Following in the footsteps of Dr. George Bomberry

Provost Christopher Manfredi told McGill’s newest cohort of Indigenous graduates that they were following footsteps that had been laid down almost 150 years ago.

“In 1875, McGill bestowed a degree on its first Indigenous graduate, Dr. George Bomberry, Kanyen’kehà:ka, Six Nations. Since that time, the presence and contribution of Indigenous students at McGill has continued to grow,” said Manfredi.

The Provost noted that in 2021, 91 First Nations, Inuit and Métis students have completed degree programs and certificates at both the undergraduate and graduate levels, from across all McGill’s Faculties.

“Your paths leading to this moment may not have been easy. Many of you confronted and overcame systemic barriers just to get here,” said Manfredi. “For all your perseverance and commitment, especially under the exceptional constraints of the pandemic, you have many reasons to be proud of yourselves and to feel confident in your abilities. May this confidence stay with you in the coming years.”

Forgiveness is the key to reconciliation

In light of the horrific discoveries of unmarked graves of Indigenous children on the sites of former Residential Schools, Geboe spoke eloquently on the power of forgiveness. “Forgiveness is a mighty lever. It is a great tool to remove barriers and allow people to flourish,” he said. “You can hate poverty. You can hate homelessness and substance abuse. You can hate racism. But don’t hate another person.

“If someone has done something wrong, they should be held accountable. But the pathway toward reconciliation for us interpersonally is to reject all this worthlessness that was put upon us and to value each other and ourselves.’

Don Barnaby, Cultural Knowledge Keeper, who had opened the ceremony with a traditional Welcome Song, brought the proceedings to an end with an Honour Song.

What’s the origin of the scarf ceremony?

Hi Kimberly. Read all about the origins in this 2011 Reporter article.

It is great to see Dr Bomberry (MD CM 1875) being commemorated, but he was not a member of the Mohawk Nation (Kanyen’kehà:ka) He was a hereditary chief of another of the Six Nations – Cayuga (Gayogo̱hó꞉nǫʼ). I am currently preparing a short biographical piece on him for the Osler Library Newsletter.

Universities are called to action on Indigenous issues

I Am an Ally

Honouring the lost children and survivors of residential schools