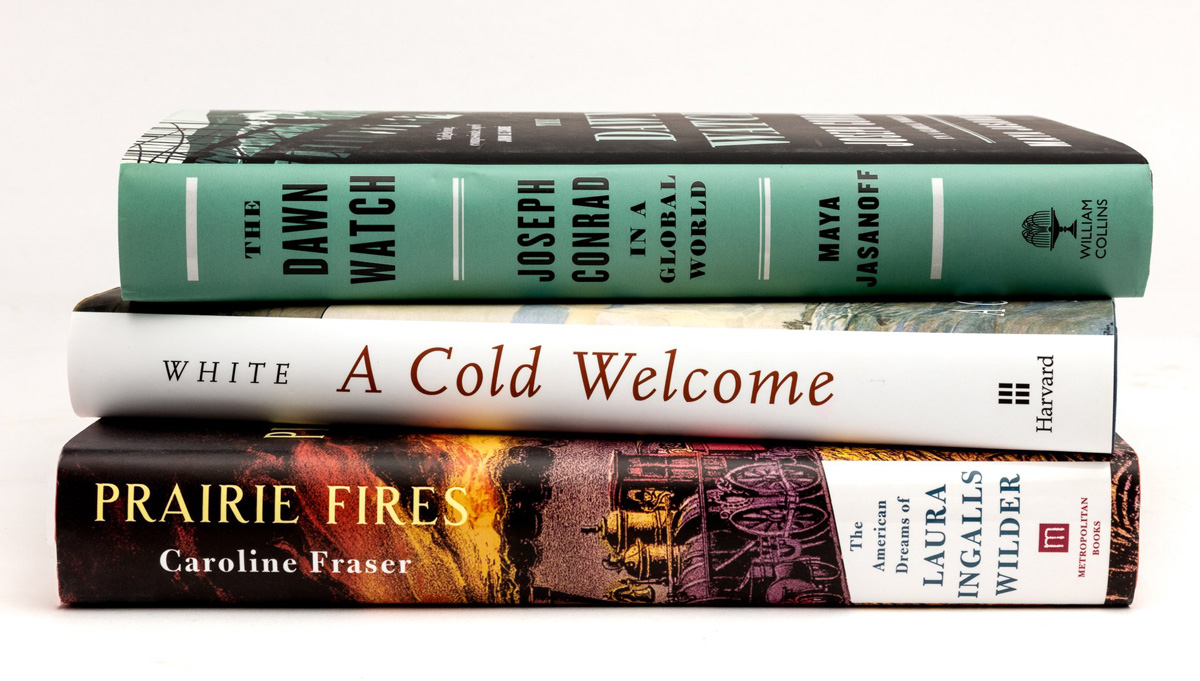 Three exceptional American historians – writing passionate, innovative works of history about new frontiers at times when the world was undergoing dramatic change – have been named as finalists for the Cundill History Prize, the world’s leading history prize, run by McGill.

Making the announcement on behalf of the jury at an exclusive event in Toronto this evening, eminent Canadian journalist and author Jeffrey Simpson said:

“These three books each demonstrate innovative and different ways of writing history, through exploration of climate change’s impact on American settlements, women’s struggles with the American frontier, and the modern relevance of a famous but sometimes forgotten novelist. They each meet the test of the Cundill History Prize: solid research, arresting narrative, and excellent prose.”

Winning US$10,000 each, the three finalists are now in the running for the grand prize, which raises the reward for the winning author to US$75,000 – the largest prize for a work of non-fiction in English.

From Bologna, Mark Gilbert, Chair of the Jury, said:

“Having invested thousands of hours into the research of their books, these outstanding historians have managed to turn their material into works of history that are also irresistible reads. Going beyond traditional, straight-forward history, the finalists for the 2018 Cundill History Prize are works that move the genre of history writing forward.”

Commenting further on this from Oxford, juror Peter Frankopan said:

“When you are writing history, you need a sprinkling of fairy dust, something that allows your prose to spring from the page, and to bring the reader with you. Our finalists are a masterclass in how this is done. These books are not just exceptional works of historical scholarship; they are also great literature.”

“It is so exciting to have these three books as the finalists for the 2018 Cundill History Prize. They are all so different, and yet, they are all much alike in that they challenge us to look at history differently.”

Fraser takes on American mythology by looking at the settling of the American west through the lens of the life of one of the country’s most beloved authors. Spanning nearly a century of epochal change, from the Indian Wars to the Dust Bowl, Laura Ingalls Wilder’s dramatic life provides a unique perspective on American history.

“Caroline Fraser blends a fascinating social history of the US with histories of the environment and the family. She has gathered a vast amount of material, with a forensic eye for detail, and she has pulled it all together brilliantly. Setting the mythology of The Little House on the Prairie against the reality of life on the prairies makes for a fascinating history.”

Spellbinding expedition into the heart of Joseph Conrad’s world

The Harvard Professor of History Maya Jasanoff, previously a finalist for the Cundill History Prize, blends history, biography and travelogue as she follows the routes and stories of Joseph Conrad for The Dawn Watch: Joseph Conrad in a Global World.

Jasanoff presents the Polish-British writer as someone who embodied the issues of his turbulent time: migration, terrorism, the tensions between global capitalism and nationalism, the promise and peril of a communications revolution. The Dawn Watch embarks on a spellbinding expedition into the heart of Conrad’s world – and through it our own.

“Maya Jasanoff shows Joseph Conrad as a guide through issues bigger than him. And, in so many ways, these are the same issues we are grappling with, in different ways, today. Extremely well plotted, technically brilliant and beautifully written, this is a work of history that presents us with new ways of reading about authors, and their times.”

Timely reminder of the risks of a changing and unfamiliar climate

With A Cold Welcome: The Little Ice Age and Europe’s Encounter with North America, the Ohio State University Associate Professor of History Sam White delivers an inter-disciplinary investigation into the decisive role the climate played in the success and failure of the first North American settlements.

Evidence from climatology meets the written historical record to show how the severity and volatility of the period of climate change called The Little Ice Age threatened to freeze and starve out the Europeans. As the world confronts an uncertain future from global warming, this innovative history is a timely reminder of the risks of a changing and unfamiliar climate.

“Sam White has written a well-judged, nuanced, and deeply humanistic book. As a scholar in his field, I am happy to say that, having read this work, I will have to revise every lecture I have ever given. A Cold Welcome makes us look very, very differently at something we thought we knew well.”

Winner to be announced on November 15

Run by McGill University, the international Cundill History Prize honours the abiding vision of its founder, the McGill alumnus F. Peter Cundill: One of the most highly regarded global investors of his time, the globe-trotting philanthropist believed passionately in well-written works of history as the best foundation for a better informed public debate.

The finalists were announced at an event at Massey College, Toronto.

The winner will be revealed at the Cundill History Prize Gala in Montreal, on November 15, alongside a series of events at McGill including the annual Cundill History Prize Lecture, which will be delivered by the British historian Daniel Beer, who won last year’s prize for The House of the Dead: Siberian Exile Under the Tsars, his groundbreaking study of Siberian penal colonies.