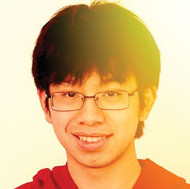 Clarence Leung may enjoy indulging in a game or two of Angry Birds, but these days, the game taking up most of his time is a little more serious. Leung spent his summer interning for Crowdsourcing Biology, based at the Scripps Research Institute.

The private, non-profit research institution is headquartered in La Jolla, California, but Leung worked from his Montreal home, communicating via web chat and video calls. “Not having to commute is the great thing about being a computer scientist,” says Leung, who worked on the development of “Dizeez,” a game that engages players to help find missing links between different genes and diseases. “Our goal is that, while players are having fun, they will contribute to science by helping researchers gather more data,” Leung says. “So far, we’ve been able to identify several novel gene-disease links related to conditions such as leukemia and melanoma.”

It doesn’t hurt that Leung is a joint computer science and biology student. “The work I’m doing uses much of the coursework and research I’ve performed in machine learning and computational biology,” he says. “It’s an experience that has me trying to solve what are known as NP-complete problems, which are the toughest problems in the bioinformatics field. They can’t be easily solved by brute-forcing all possible solutions with even the most powerful computers. These problems include estimating the genomes of organisms from long ago, based only on the genomes of organisms that exist today, and creating accurate 3-D models for proteins using only information about their electrostatic properties.”

In the future, Leung is considering going to graduate school to further study how computer science can assist in the biology field.

“It’s great to be part of a new way of how researchers are approaching the field of biology, with algorithms and statistics, rather than just experiments and test tubes.”