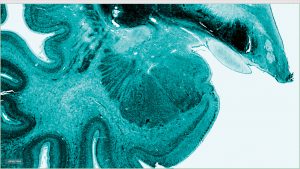 MRI SCANS JUST GOT THE GOOGLE EARTH TREATMENT. BigBrain, the first 3D microstructural model of the entire human brain, allows users to zoom into the brain to see various cells the way we zoom into satellite images and see houses on a street. The interface is free and publicly available to researchers worldwide at bigbrain.loris.ca.

“The BigBrain atlas offers nearly cellular resolution, that is detail close to the level of the cell, a capability that has not been previously available in 3D for the human brain,” says Alan Evans, professor at the Montreal Neurological Institute at McGill and the sole Canadian lead researcher on the project.

The brain is considered the most complex structure in the universe with 86 billion neurons.

Big Brain is reconstructed from 7404 histological brain sections that were stained for cell bodies and then digitized.

While present-day MRIs have a resolution of 1 millimetre, the BigBrain’s resolution is 50 times finer and provides a cellular-level view of the brain of 1,000 microns per millimetre.

The project’s implications are vast. BigBrain can be used to integrate and correlate a wide range of genetic, molecular, electrophysiological and pharmacological data. The atlas has the power to accelerate simulations of normal brain development as well as degeneration caused by disease and advance clinical research, for example, by pinpointing specific types of nerve cells linked to intractable epilepsy.

Perhaps the most powerful aspect of the platform is its accessibility: open to any user who registers, the atlas offers a fascinating way of looking at an organ that we know so intimately and yet, in many ways, we do not know at all.