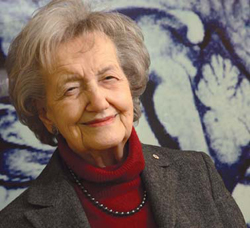 Brenda Milner needs a bigger mantelpiece. On November 20, 2009, in a ceremony held in Berne, Switzerland, the legendary Montreal Neurological Institute researcher received the International Balzan Prize, yet another entry on her long list of prestigious accolades. The Balzan Prize, given in memory of the late Italian newspaperman Eugenio Balzan, aims to “foster culture, the sciences and the most meritorious initiatives in the cause of humanity, peace and brotherhood among peoples throughout the world.” The prize is worth one million Swiss francs (approximately $1 million); half the money is earmarked for research. The award acknowledges Milner’s groundbreaking contributions to modern cognitive neuroscience. (See the Summer 2009 issue of Headway for an interview with Professor Milner about her storied career.) She is the recipient of numerous academic awards, including the Gairdner International Award in 2005 and the Prix Wilder-Penfield (Prix du Québec) in 1993. Milner is also a fellow of the Royal Society of London and the Royal Society of Canada and was promoted to Companion of the Order of Canada in 2004. In 2007, Milner created the Brenda Milner Foundation to support and foster young researchers in the field of cognitive neuroscience through postdoctoral fellowships at the MNI.