The traditional nuclear family is no longer a given. For some, “family” now means living with a step-parent, step-brothers and sisters. For others, it’s living with a mother or a father, but not both. Besides the effects they have on family members, the consequences of these changes touch a wide range of sectors in our society, from the economy to family law. By mining a wealth of statistical data, Céline Le Bourdais is gaining important insights into how marriage, divorce and separation are affecting Quebec society. 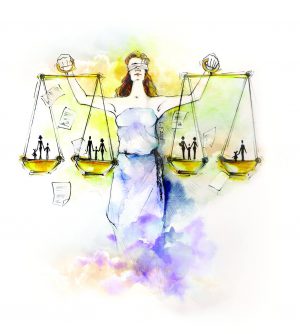 The recent lawsuit was easy tabloid fodder. A Brazilian expat, known only as “Lola,” was suing her former common-law partner, the father of her three children, for a $50-million lump sum plus $56,000 in monthly alimony. The man, “Eric,” was said to be a high-profile Quebec tycoon. Tongues wagged about Eric’s identity, and about a high-rolling lifestyle alien to most people. But what intrigued Céline Le Bourdais about the case wasn’t the speculation, the schadenfreude or the salaciousness. She was interested in serious questions about the changing nature of the Quebec family.

Céline Le Bourdais is a professor in McGill’s Department of Sociology. Since the mid-eighties, she has measured the extent of family transformation from a demographic point of view. In 1951, for example, 96.9 per cent of Quebec parents were married. Today, marriage produces less than 40 per cent of Quebec babies. In June 2010, Le Bourdais ended her 10-year run as director of the Quebec Inter- University Centre for Social Statistics. The centre, which has a secured data laboratory at McGill, brings together the University and six other Quebec schools—Concordia, the Institut national de la recherche scientifique, the Université Laval, the Université de Montréal, the Université de Sherbrooke and the Université de Québec à Montréal — and provides researchers with access to the detailed data from Statistics Canada’s population censuses and large surveys, such as the General Social Surveys (GSS) on “family transitions” (2006).

Le Bourdais’s insights into the changing realities of Canadians’ day-to-day lives caught the attention of the Attorney General of Quebec, who asked her to act as an expert witness on the Lola-Eric case. The Attorney General asked Le Bourdais and her colleague, Èvelyne Lapierre-Adamcyk (an emeritus professor at the Université de Montréal), to document, from a demographic point of view, the similarities and differences between married couples and common-law couples. Le Bourdais’s research reported that—when it came to money management, stability and even fertility rates—the differences between the two unions run much deeper than the existence or absence of a marriage certificate.

“We looked at different countries and found that married couples everywhere shared money a lot more than cohabiting couples. The latter are more likely to keep their money separate. But at the same time, cohabiting couples share domestic work more equally. Married couples are more likely to specialize in work. They pool money, instead of pooling work,” says Le Bourdais. Her study also showed that cohabiting unions are more unstable than marriages, and that married couples have more children than those living common-law. Her findings helped the judge render a decision in July 2009 against Lola’s constitutional argument that, in terms of partners’ post-separation rights and obligations, cohabiting partners are equal to married couples. (At time of writing, an appeal was pending.)

Le Bourdais’s research has also made an important impact on public policy in Canada. Along with her two research colleagues, Nicole Marcil-Gratton (Université de Montréal) and Heather Juby (then at INRS-Urbanisation, Culture, Société, now the knowledge transfer coordinator for the Canadian Research Centre Data Network), Le Bourdais conducted a research series on children’s family trajectories, examining contact between fathers and their children after separation. The research, funded by the Ministers of Justice in Quebec and Ottawa, is conspicuous for approaching the subject from the father’s point of view, as opposed to the traditional mother-focused approach. The study followed a large number of children over time, which made it possible to study how a variety of factors (such as the employment status and incomes of parents, the sharing of roles and the organization of family life while living together) influence child care and alimony settlements. Their findings contributed to the final Federal-Provincial-Territorial Report on Custody Access and Child Support and served as a background for discussions that led to the adoption of the Canadian Child-centred Family Justice Strategy in December 2002.

Le Bourdais remains active in the Quebec Inter- University Centre for Social Statistics. In April 2010, she and Èvelyne Lapierre-Adamcyk received a grant from the Social Sciences and Humanities Research Council (SSHRC) of Canada to continue analyzing the ongoing transformation of family life in Quebec and Canada. Building upon the information gained through Statistics Canada’s surveys and Quebec birth statistics, they’re focusing on changes in the importance and meaning of both marriage and common-law unions in Quebec and Canada, and looking at whether birth rates respond to family policies, such as $7-a-day childcare services and extended parental leave and benefits. Le Bourdais is also collaborating with two of her PhD students, France-Pascale Ménard and Christine Proulx, on a study of how baby boomers’ low fertility, and high conjugal instability, affects their family networks when they reach old age. She hopes the latter project will help paint a fuller, more accurate portrait of the challenges that lie ahead.

“Right now we’ve been looking at who cares for old people,” says Le Bourdais. “Usually it’s the spouse or the children, but what happens after parents separate? Statistically, men who have both biological children and stepchildren are more likely to live with their stepchildren and their mother, and to have sporadic or even lose contact with their biological children. In this case, who will take care of those separated fathers as they grow old? The biological kids they left or the stepchildren? The answer is far from clear, as the adults who have gone through these changes are just starting to reach retirement age.”