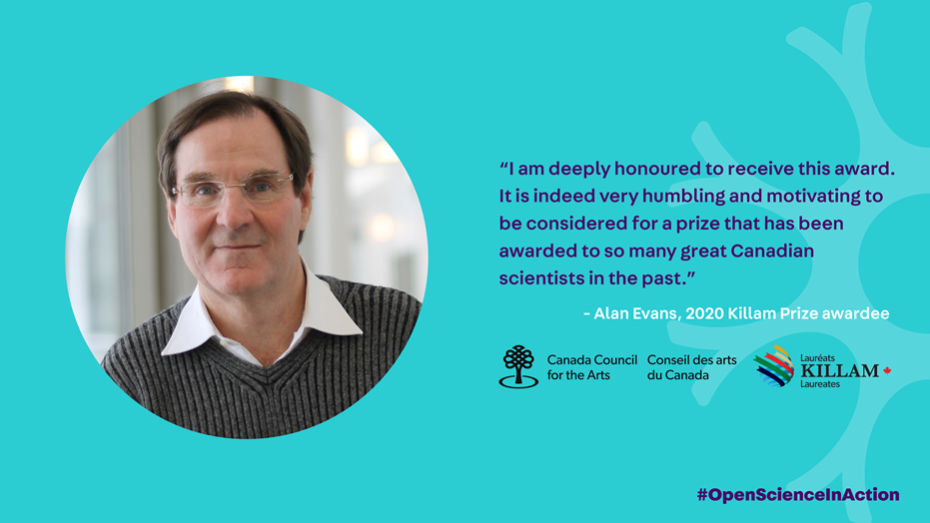 As announced this morning, neuroscientist Alan Evans has been awarded the Killam Prize, one of Canada’s highest honors, for his numerous contributions to the understanding of the human brain.

Evans is an internationally recognized researcher at The Neuro (Montreal Neurological Institute-Hospital), James McGill Professor in Neurology and Neurosurgery and the Victor Dahdaleh Chair in Neurosciences.

The Killam Prizes recognize the career achievements of eminent Canadian scholars and scientists actively engaged in research, whether in industry, government agencies or universities.

“I am deeply honoured to receive this award,” said Evans. “It is indeed very humbling and motivating to be considered for a prize that has been awarded to so many great Canadian scientists in the past.”

The Killam Prize adds to Evans’ substantial list of accolades, which include the Glass Brain Award from the Organisation of Human Brain Mapping, the Senate of Canada 150 medal, the National Margolese Prize in Human Neurological Disorders, and the Vezina Prize for Quebec Neuroradiology. In addition, he is a Fellow of the Royal Society of Canada, and has received the Prix du Québec’s highest citation for biomedical research, the Wilder-Penfield prize.

The journey Evans took to becoming a brain scientist did not begin on a typical path. His first degree was in physics at Liverpool University, followed by medical physics at Surrey University and then his PhD and post-doctoral fellowship studying the structure-function interaction of proteins at the Department of Biophysics, Leeds University. He joined McGill University in 1984 and became a full professor in 1995.

Since then, Evans has built a reputation as one of the world’s leading thinkers on the structure and functioning of the human brain. His research has led to important biomarkers for the early diagnosis of neurological disorders, notably Alzheimer’s disease, autism, and psychiatric illnesses. With over 600 peer-reviewed papers, he has been ranked in the top one per cent of highly cited researchers for neuroscience and behaviour since 2014.

One of Evans’ most engaging projects is the BigBrain Atlas – a virtual 3D reference brain with 50 times greater resolution than previous human brain models. In development with other institutes from the European Union, this promises to be a major leap forward in our collective understanding of the brain. Although the project has only recently begun, it is already being utilized by researchers, Parkinson’s surgeons, and other educational institutions.

About the Killam Prize

The Canada Council for the Arts awards five Killam Prizes of $100,000 each year, one prize each in the fields of humanities, social sciences, natural sciences, health sciences, and engineering. These prizes, which are among most distinguished research awards in Canada, were established by the Killam Trusts thanks to a bequest and gift of Mrs. Dorothy J. Killam in memory of her husband, Izaak Walton Killam, and his outstanding achievements.

McGill researchers among the world’s most cited: Web of...