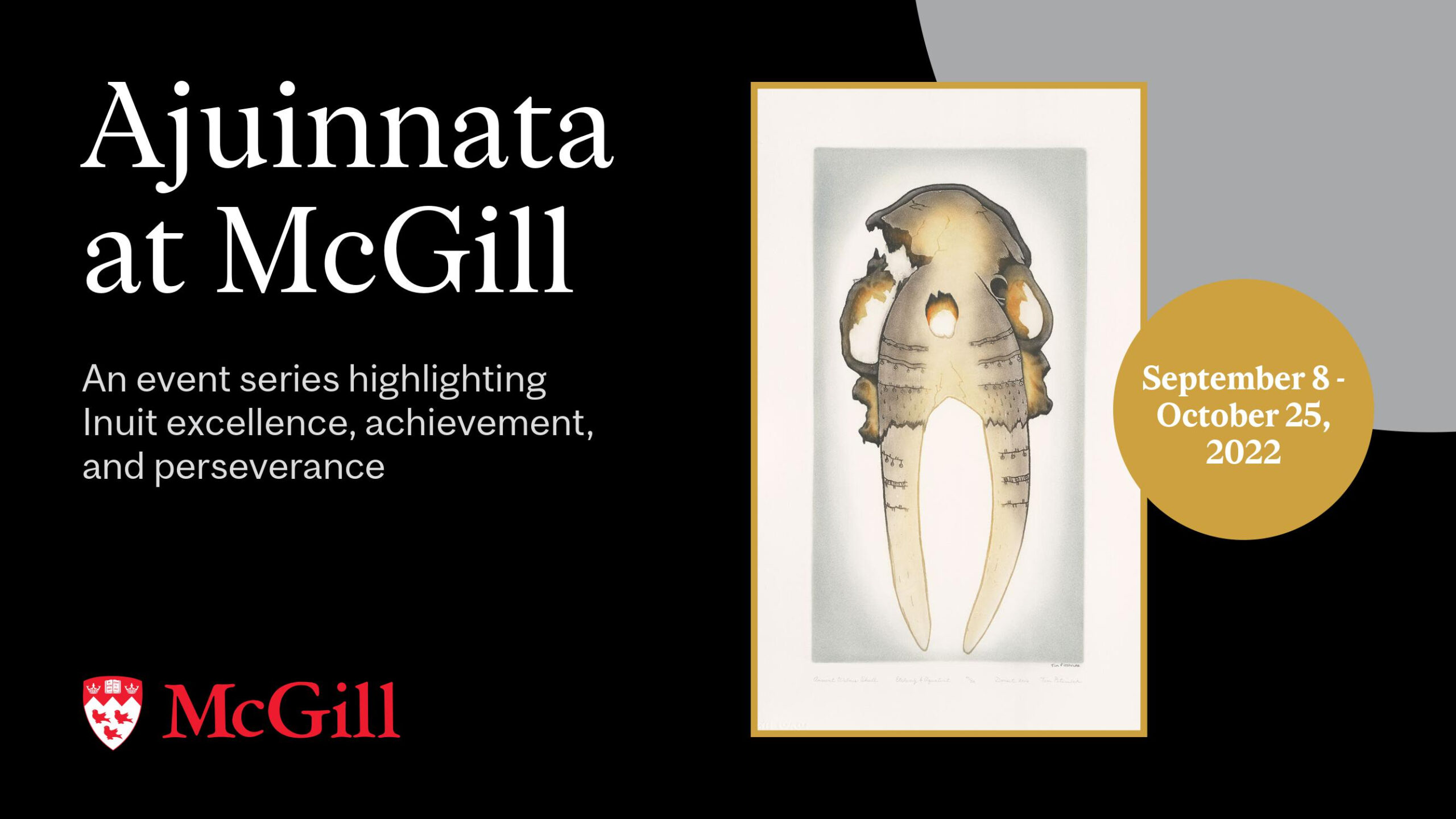 From September 8 – October 25, McGill will host Ajuinnata at McGill, a campus-wide celebration of Inuit excellence and achievement in a variety of fields.

In all, twelve events will bring together a wide range of Inuit leaders, including artists, politicians, chefs, business leaders, filmmakers, and climate-change advocates. Sessions include everything from a panel on Inuit self-governance (Sept. 22) and a sealskin crafting workshop (Sept. 14); to a discussion on Inuit health and wellness (Oct. 17); and a demonstration of traditional Inuit games (Sept. 28).

The celebrations kick off on September 8, with an opening ceremony hosted by Professor Celeste Pedri-Spade, McGill’s first Associate Provost (Indigenous Initiatives), and a vernissage of the exhibit Inuit Qaujimajatuqangit: Art, Architecture, and Traditional Knowledge.

“Qaujimajatuqangit means ‘Inuit ways of knowing’ and ‘Inuit knowledge’ and ‘Inuit ways of doing things’ and ‘Inuit technology,” says Richard Budgell, an Assistant Professor in the Department of Family Medicine and one of the organizers of Ajuinnata at McGill. “It’s a beautiful term because it is all-encompassing.”

Budgell says this inclusive term could be used to describe the entire Ajuinnata at McGill initiative.

“There is a great variety of activities by and about Inuit that are going to be happening as part of the festival,” he says. “I don’t think anything like this has ever been done before at McGill. It’s a huge advance in transmitting Inuit knowledge and worldviews to the to the McGill community and a broader audience.”

For Aneeka Anderson, Communications Assistant, Indigenous Initiatives, the sweeping scope of Ajuinnata at McGill, has a lot to do with the makeup – and enthusiasm – of the organizing committee.

“The beauty of this project is it brought together a group of really passionate people who care about Inuit, who care about the Arctic, who care Inuit art and Inuit architecture,” says Anderson.

“We had a diverse group of people at the table from the beginning. We had people from architecture, the visual arts collection, Indigenous Initiatives, the English Department, the Department of Family Medicine – all of these people who cared about the project and gave it everything they had.”

But the incredible diversity of Ajuinnata at McGill, is also a reflection of the Inuit culture, history and worldview. “Inuit don’t silo information and put it in some kind of box. We don’t organize knowledge that way,” says Budgell, a Labrador Inuk. “What was required for Inuit to survive and prosper in the environments that they lived in was having broad understandings and conceptions of the world… In that way the distribution of knowledge is very egalitarian and horizontal. Every community member is seen as having valuable knowledge. It’s nice to see this festival as showing that kind of spirit with such a broad range of people who have this broad range of expertise.”

The task of lining up that broad range of people fell mostly on Anderson, an Inuk from Ottawa whose family originates from Pangnirtung, Nunavut.

“It was pretty special, being the one who was reaching out to all of these people,” she says. “I was thinking ‘What is someone like Natan Obed, President, Inuit Tapiriit Kanatami, going to say? Is he really going to want to do this?’ And then I got the yes, and I was on such a high. It was such a star-struck, touching moment.

“And with each person who said yes, it got easier to get other people because they were so impressed by the group we were bringing in,” says Anderson. “It just grew and grew and grew.”

Obed will be participating in the panel on Inuit self-governance (September 22) along with Pita Aatami, President, Makivik Corporation; and Lisa Koperqualuk, President, Inuit Circumpolar Council Canada. “That’s three leaders of national and international importance who are willing to come and talk to people at McGill,” says Budgell. “That’s pretty extraordinary.”

For McGill to organize and host a festival of this scope celebrating the accomplishments of Inuit people has already had a positive impact – even before the Opening Ceremony. Anderson says many of the participants were impressed by the breadth of Ajuinnata at McGill.

“It was very touching to hear that from people who maybe didn’t expect this from McGill. [Inuit] haven’t always had the spotlight,” she says. “Our goal has always been to center and celebrate Inuit because it’s so well deserved. There are Inuit at McGill who need to be in spaces where they feel celebrated. With Ajuinnata at McGill, they can celebrate their people, their leaders, their artists, their knowledge holders.”

“I’m very much advocating that we start looking at peoples specifically, so that we’re not talking about ‘Indigenous’ because that creates an assumption of homogeneity – and that’s completely wrong,” says Budgell. “Whereas, if we if we start talking about Inuit, and Cree, and Miꞌkmaq, and Innu, then we remind people about the diversity within the Indigenous population in Canada.”

Ajuinnata at McGill will run from September 8 to October 25. Most events are open to the public. Consult the schedule of events.