Humans are getting good at reaching outer space. But, like on Earth, we’re lousy at cleaning up after ourselves up there. Law professor Ram Jakhu is helping tame this growing otherworldly problem—before it’s too late.

On a mantel in his Peel St. office in Montreal, McGill Faculty of Law associate professor Ram Jakhu keeps a model of an INSAT-2 satellite. The INSAT-2 series, first launched in 1992, played a large role in developing India’s telecommunications capacity. But satellites, even historic ones, eventually outlive their usefulness. In the case of INSAT-2, the 2,550-kilogram satellite was good for about 12 years. After that, it became 2,550 kilos of junk orbiting the Earth. It wasn’t alone.

As the associate director of McGill’s Centre for Research of Air and Space Law (CRASL), Ram Jakhu considers the legal ramifications of space junk, the man-made detritus that’s left to float through the cosmos. And there’s a lot of junk to consider. The United States Space Surveillance Network has catalogued over 17,000 drifting objects— mostly discarded pieces of spacecraft, rockets and satellites—that exceed 10 centimetres in diameter, and there are an estimated 300,000 other objects that are between one and 10 centimetres in diameter. (There are also likely millions of even smaller pieces.) Orbiting at speeds ranging from 10,800 kilometres to 27,400 kilometres per hour, even a small chunk of old rocket can do serious damage to a shuttle or communications satellite, or kill an astronaut engaged in extravehicular activity. Even though it’s designed to burn up in re-entry, such junk, along with whatever residual fuel or radioactive material it may contain, can also sometimes fall to Earth, contaminating areas in which it lands.

The accumulation of space junk can impede exploration. And while pinpointing who is legally responsible for unmarked debris—or even collisions involving identifiable debris—is difficult, properly enforced policies can ensure that less junk is left up there in the first place. “That’s my pursuit,” says Jakhu, “to seriously contribute to the development of appropriate rule of law in space, including the control of space debris, so that this final frontier remains a useful environment for the benefit of all mankind.” He and his colleagues are proposing these laws and regulatory policy mechanisms, in the hope governments will adopt them.

In 1951, 1 year after the U.S. launched its first rocket at Cape Canaveral, McGill University introduced its own cosmic first: the world’s first space law program. In 1976, the University added CRASL, the Institute of Air and Space Law’s interdisciplinary research centre, which focuses on the technical, economic, policy and legal implications that arise when humans take to the heavens—or, in the case of space junk, what’s left behind in the heavens. Jakhu himself began studying space debris in the early eighties, when graduate student Howard Baker, now a senior legal officer with Canada’s Department of Justice, chose it as his thesis topic. “It was something very new,” Jakhu says. “This was the first important environmental problem in space.”

The problem persists. In the half century since the Sputnik I satellite kicked off the Soviet-U.S. space race, the ramifications of leaving junk in space have gone largely unconsidered. “Nobody bothered,” Jakhu explains. “They said, ‘Come on, space is big. How could this be a problem?’” Space may indeed be infinite, or at least very large, but man-made debris is concentrated in relatively small sections (known as Low Earth Orbits and the Geostationary Orbit), which are increasingly well trafficked by observation missions and telecommunication satellites. Despite this mounting threat of collisions, there are still no specific laws covering the production and management of space debris. (This despite a 1978 incident in which the Canadian government was stuck with a $3 million bill to clean up the radioactive mess when the Soviet Cosmos 954 satellite plummeted to the Northwest Territories. People started talking seriously about the need for space laws, but ultimately Canada’s initiative to develop international rules for nuclear power sources on satellites mostly fell on deaf ears.) Guidelines exist, but neither established nor emerging space powers bother to follow them regularly. “Governments are interested in space debris,” says Jakhu, “but are not taking any strong or effective measures to control this debris and to find solutions to this issue.”

That’s where Jakhu and his colleagues, from McGill and Germany’s University of Cologne, come in. Jakhu has long known the director of Cologne’s Institute of Air and Space Law, Stephan Hobe, whose master’s thesis he oversaw in 1986. Their ongoing collaboration fell easily into place.

In 2007, the United Nations Committee on Peaceful Uses of Space (UNCOPUOS) established guidelines to slow the creation of space debris. These guidelines suggest that only necessary debris—from, say, shuttles being launched—be left in space, and that vessels carrying fuel release this fuel, to prevent debris-producing explosions. Yet, there is nothing in place to prevent a nation from, say, testing long-range weapons by blasting its own derelict satellites into smithereens, as China did to its Feng Yun 1C weather satellite on January 11, 2007. (It’s estimated that the destruction of Feng Yun 1C alone created some 40,000 pieces of debris larger than one centimetre, doubling the amount of space junk at that altitude.) “The UNCOPUOS guidelines are a good step, that’s a first step, but what happens to the hundreds of thousands of pieces already there?” Jakhu says. “The physics of space seems to be such that you can’t have a vacuum cleaner there.” 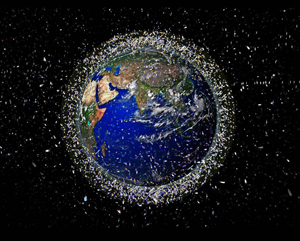 At a CRASL international interdisciplinary space debris conference at McGill in May 2009, participants assessed the seriousness of the problem: How much junk is up there? Whose is it? What happens when satellites fail to return to Earth or remain intact when they do? Who should monitor space junk? “It’s dangerous for everybody,” Jakhu says. In April 2010 in Cologne, the researchers will use data presented at the conference to draft proposals for laws and other regulatory mechanisms aimed at slowing the proliferation of space junk, which they will then present to space powers and the United Nations. “Of course, governments may accept or reject these suggestions,” Jakhu says. “But I think they’ll recognize that these come from a group of experts, and that they should be considered seriously.”

“What is really required is that we enact rules that impose duties upon states and private actors, which they’d have to observe while carrying out outer space activities,” says Cologne’s Stephan Hobe. “Without liability, there are no consequences and, moreover, no incentive to avoid pollution.”

Nations that flout the law, Jakhu says, should be reprimanded by bodies like the UN, or brought before an international court of justice. (Jakhu was in fact recently appointed to a space law advisor group in the Permanent Court of Arbitration in The Hague.) Eventually, he says, it will be in all actors’ interests to follow these laws.

Space debris has also begun to take an economic toll. In February of this year, Cosmos 2251, a Russian satellite, collided with a satellite owned by Iridium, an American telecommunications firm. The telecommunications satellite, valued between $80 million and $90 million, was taken out of commission in a scenario Jakhu likens to two bullets colliding, and Iridium’s clientele was left without service. (See sidebar for a timeline of the increasing frequency of confirmed collisions in space.) “It was resolved through negotiations because nobody could conclusively determine whose fault it was,” he says. To protect its own interests, the private sector, he’s sure, will be forced to pressure governments to take the proper precautions concerning debris.

Governments, in turn, might turn to the Centre for Research of Air and Space Law for insight. “We’re looking at what the law should be,” says Jakhu. “I want to go where others have not gone in the space law field.”

The McGill Centre for Research of Air and Space Law receives funding from the International Association for the Advancement of Space Safety, the Erin J.C. Arsenault Fund, the Boeing Corporation, the Social Sciences and Humanities Research Council of Canada, the Square World Foundation and the Asia Pacific Foundation of Canada.