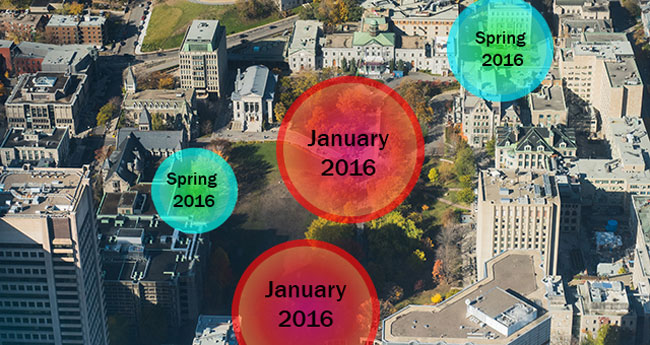 When McGill began providing wireless network service back in 2002, it was available in just a few buildings. Over the following 3-5 years coverage increased steadily to include all buildings on both Downtown and Macdonald campuses. Now we’re poised to take the next leap forward by providing WiFi to outdoor areas on campus.

The technology was put to the test on Nov. 7, during an emergency simulation exercise, conducted by McGill Campus Public Safety, Montreal Police (SPVM) and Urgences Santé. For the event temporary wireless access points were installed at five locations on lower campus. The outdoor WiFi allowed a crew of videographers to stream the simulation from their iPhones to a room in Leacock Hall, where safety responders, members of senior administration and others were able to see, in real-time, how McGill’s response to an active shooter would unfold.

Gloria De Melo, Emergency Management Officer for McGill Campus Public Safety, expressed her satisfaction with the outcome. “Overall the WiFi performed as expected,” she said. “We were able to experience the simulation by video, and we didn’t have any technical issues. The IT Services team, and all participants in the exercise, saw the importance of this activity and really came together to make it happen.”

The safety simulation test gave the Network Infrastructure team valuable data in order for them to make final adjustments to the service and begin delivering the service to the downtown campus in January.

Spiro Mitsialis, Manager of IT Services’ Network Infrastructure group, mentioned that there are several constraints when dealing with WiFi outdoors, apart from ensuring that the equipment is weather-proof and secure. “Many of the McGill buildings are considered heritage sites, so we need to negotiate with building managers and McGill’s Aesthetics Committee to make sure the wireless access points are installed in locations that do not detract from the aesthetic appeal,” said Mitsialis. “In some cases we may need to paint them to blend in with the surroundings.”

Additionally, he said each wireless access point still needs to be wired to the main network, which poses challenges outdoors. Copper Ethernet cables are limited to 100 meters which is easily surpassed outdoors. Special infrastructure needs to be added, underground conduits need to be identified and in some cases the ground will need to be dug up to run the fiber-optic and copper cabling.

Where, when and how will you be able to use it?

The selection of these locations was based on feedback from students, faculty and staff during a data gathering effort in October 2014. Over the past couple of years IT Services has actually been providing temporary WiFi service during FROSH week to student societies that set up booths in the area in front of the Three Bares.

The outdoor WiFi service will be an extension of existing campus WiFi, so once you’re connected there’s no additional configuration needed, and your connectivity should be seamless as your move around the campus within the covered zones (see the illustrated map).

Note that there are two frequencies for WiFi: 2.4 GHz and 5 GHz.

Testing has shown that users experience a clearer, faster signal at the 5 GHz frequency, due to the higher bandwidth and less interference from extraneous downtown signals. For these reasons, we recommend using devices that support the 5 GHz frequency. If you’re buying new equipment look for “5 GHz”, “802.11ac”, or “Wireless AC” in the manufacturer’s specifications. Wireless statistics show that approximately 45 per cent of devices used at McGill are currently using 5 GHz. These include Apple iPhone 5 and higher and most Android devices purchased after 2012; older mobile devices can be used, but only support 2.4 GHz.

IT Services is looking forward to your feedback on the service once it’s made available. We will analyze usage in the spring/summer in order to plan for more outdoor wireless coverage. Watch for upcoming announcements about where to send your comments.

How about improving the wifi indoors before expanding it outdoors!
I work almost everyday in the Redpath library! I couldn’t even download a paper today (December 8th)!
It was the case for Bronfman as well!
Also, the internet in my office in the library comes and goes from time to time!

Journeys through healthcare: An art exhibition