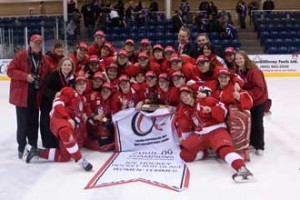 The McGill Martlets are the women’s hockey champions of Canada for the second year in a row.

In a rematch of the 2008 Canadian Interuniversity Sports (CIS) championship tournament final, the No. 1-ranked Martlets took on and defeated the No. 2 Sir Wilfred Laurier Golden Hawks by a 3-1 score in Antigonish, N.S. With their 54th consecutive win over CIS opponents, the Martlets became only the second team in McGill history to win back-to-back titles. The soccer Redmen were national champs in 1981 and 1982. It was the Martlets third consecutive trip the finals. In 2007, the Martlets dropped a 4-0 decision to the University of Alberta Pandas. The team has won all 14 of its playoff games since that upset loss.

McGill’s Ann-Sophie Bettez opened the scoring at 11: 41 of the first period on a three-way passing play with linemate Vanessa Davidson and rearguard Catherine Ward, who was named the tournament MVP. Sophomore Alessandra Lind-Kenny of Calgary put the Martlets up 2-0 at 6: 29 of the second. McGill went ahead 3-0 on CIS rookie of the year Marie-Andrée Leclerc-Auger’s power play marker at 11: 07 of the third. The Golden Hawks got on the board only 53 seconds later when tournament scoring leader Lauren Barch tallied, but it was too little, too late for Wilfred Laurier. Martlets goaltender Charline Labonté stopped them the rest of the way, including the final two minutes when McGill was penalized twice.

The Martlets had a scare in the tournament opener, needing overtime to defeat the No.3-ranked Manitoba Bisons, 2-1.  Vanessa Davidson was the OT hero, scoring on the power play just 1:38 into the extra frame. In their second game, McGill defeated the hometown St. Francis Xavier X-Women 5-1 in front of a full house of 1,740 at Antigonish’s Keating Millennium Centre.

The championship victory marked the final game as a Martlet for Ward, backup goaltender Kalie Townsend and team captain Chantal Gauvin, all expected to graduate this spring. Labonté will also miss next season as both she and Ward will be moving to a centralized national team camp in Calgary in hopes of making the Canadian Olympic team. Labonté and Ward are now off to Finland as members of Team Canada for the 2009 IIHF world championship, April 4-12.