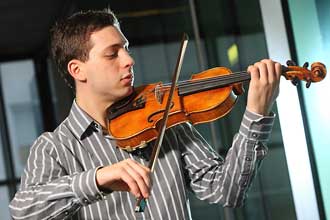 The 21-year-old undergraduate is the fourth winner of the $20,000 award, presented annually to a top McGill string player who is close to completing studies and has shown the potential for a successful performing career.

Schwebel is in the final year of his Bachelor’s Degree in Performance program, under the tutelage of Prof. Jonathan Crow.  He is also a co-founder and co-director of Chamber Music Without Borders, a student-run outreach program that brings live classical performances to community institutions in the Montreal area.

“Aaron is a superb musician and a valued member of the community,” said Don McLean, Dean of the Schulich School. “He has given me personally, and all of us at the School, some great musical moments as a soloist, orchestral player, and string quartet member. He now joins our three previous Golden Violin Award winners as another great ambassador for McGill.”

The award will be celebrated Feb. 9 at the annual Bravo event honouring McGill researchers; Schwebel will perform the Preludio movement from the Bach Partita No. 3 during the event.

Schwebel, who plans to pursue a Master’s degree, is applying to three U.S. schools: Indiana University, Juilliard and the New England Conservatory.   The $20,000 prize money could help cover expenses during graduate studies, he told the Reporter.  He also noted that he’s looking for a new bow, which “can be quite costly.”  (Price tag for his last one: $4,000.)

He’d also like to put some money aside to pursue his ultimate goal:  launching a professional string quartet.

At Schulich, he was a founding member of the Roddick String Quartet, an ensemble that was formed and coached by Prof. André Roy.  With fellow Roddick String Quartet members Ewald Cheung, Isaac Chalk and Yoona Jhon, Schwebel participated last spring in the prestigious London International String Quartet Competition – a remarkable achievement for such a young ensemble.  Schwebel played second violin – a role that involves playing in a lower register than the first violin. “I really enjoy being the inner voice in the quartet; it allows me to learn the piece from the inside out.”

Chamber Music without Borders, formed two years ago, brings high-quality performances to parts of Montreal where people otherwise “might not have access” to classical concerts, because of physical or financial constraints, Schwebel said.  The group hosts free weekly concerts by McGill musicians at St. James United Church and performances for the homeless drop-in community centre above the church. “A lot of the members in the drop-in centre have had really hard lives, and really appreciate the chance to connect and

Schwebel grew up in Toronto, where he showed interest in music as a toddler by putting workbooks on the piano bench and banging away on the keyboard.  He started violin and voice lessons at age four. “For a while I was actually more interested in voice – and then when I was 12 my voice basically disintegrated.”

One of his violin teachers was Yaela Hertz, a Montreal-based musician.  “She told me that McGill would be a great place for me.”

Apparently, she was right.

The Golden Violin Award was provided in 2006 by businessman and philanthropist Seymour Schulich, the year after he donated $20 million to the School of Music.  Made of pewter and gold plate, the Golden Violin remains on permanent display in McGill’s Marvin Duchow Music Library.  The award recipients receive a smaller likeness in the form of a 14-karat gold lapel pin.  The three previous winners are violinist Emmanuel Vukovich, violist Lambert Chen and cellist Chloé Dominguez.

From refugee camps to McGill campus