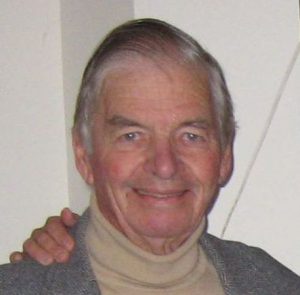 Born May 15, 1929, Tom Bassett Macaulay died happily, peacefully, with grace and kindness, a sense of humour and never a complaint after a lengthy 18-year battle with cancer at the ripe old age of 88. Tom leaves his beloved wife Diana Lillian Macaulay (nee Lebrun) of 63 years, is predeceased by his brother Doug and his sister Fran Holmes, is survived by his sister Julie Mander, and his five children Heather, Malcolm, Laura Lea, Althea and Louise Macaulay, 10 grandchildren and eight great-grandchildren.

Bearing the name of his grandfather, Tom was the son of Douglas Lawson and Ada Althea Macaulay (nee Hazen) of Hudson, Quebec.

Having had a full and rich life, Tom remained a gentleman and a loving man. He spent most of his youth in Hudson, Quebec, where he grew up with his parents. Tom attended Rothesay Collegiate in New Brunswick, skipped two grades, won the Governor General’s award, then subsequently (enrolled two years later because he was too young to get in) graduated from McGill University in Mechanical Engineering, when he met Diana who was attending The Royal Victoria Hospital Nursing School in Montreal.

Tom lived and worked as an engineer in different parts of Ontario and Quebec, and also in Jubail, Saudi Arabia in the late 70’s and early 80’s. He dedicated 11 years to the Mohawk Council in Akwesasne, who honoured him upon retirement with an aboriginal carving and plaque for his dedicated service. Tom was also instrumental in prompting the Government of Canada to arrive at the Truth and Reconciliation Commission.

Tom was a long-standing member of St. John the Evangelist Anglican Church in Lancaster, a church that benefited from his dedication on the maintenance and improvements board, reviewing and scrutinizing drawings for the church’s sanctuary addition in 1993 and fellowship hall in 1997. He moved from his hard-earned and carefully manicured waterfront home in Bainsville to Glen Garden, Maxville in August, 2014, and remained there with Diana until just a few weeks before his passing, at which time he came under the able care of Maxville Manor.

Tom will be dearly missed by all who knew him.