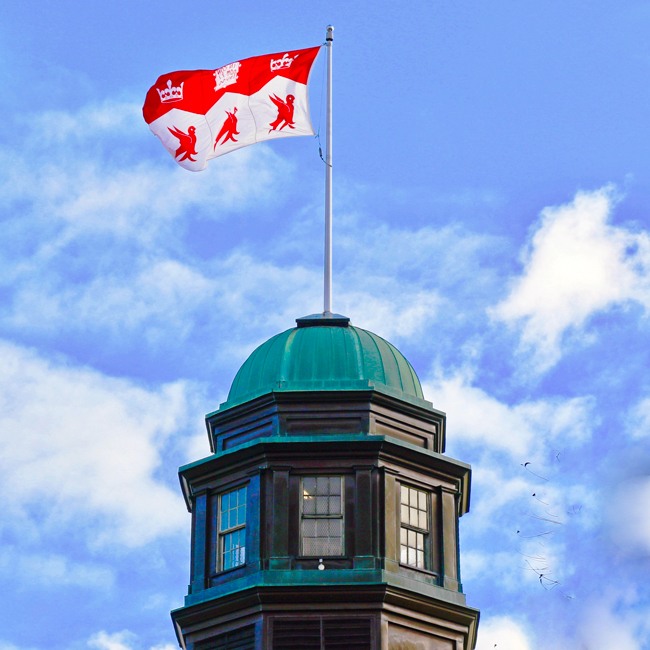 Across Canada, several schools, bridges, and buildings have been rechristened, or at least hotly debated, in light of their historical namesakes’ actions and attitudes. It’s not just names that are coming under scrutiny, either: Halifax’s recent removal of a prominent public statue is just one high-profile example of how society is rethinking visual representations as well.

McGill, too, is engaged in this conversation about how to confront thorny aspects of history. The final report of the Provost’s Task Force on Indigenous Studies and Indigenous Education, released in June 2017, for example, included a recommendation that the University rename the Redmen varsity teams. There are also regular debates about how to balance the philanthropic vision of the University’s founder, James McGill (1744-1813), with his status as a slave holder.

“The University needs a framework it can use to respond to these issues, and any others that may arise,” said Provost Christopher Manfredi, who struck a Working Group on Principles of Commemoration and Renaming in January. He tasked the group with recommending “principles to guide the University in responding to calls for change in relation to naming and commemorative practices.”

The Working Group is co-chaired by Professors Anja Geitmann, Dean of the Faculty of Agricultural and Environmental Sciences and Associate Vice-Principal (Macdonald Campus), and Robert Leckey, Dean of the Faculty of Law. The group’s membership includes three students (one undergraduate from the downtown campus, one undergraduate from Macdonald Campus, and one graduate student), faculty members, staff members, alumni, and members of the Board of Governors.

“Our work is to propose a decision-making template,” Prof. Leckey said of the Working Group’s mandate. “We’re not specifically making recommendations on a single item or name. We’re establishing and articulating principles that will provide a sense of consistency and thoroughness when addressing future calls for change.”

Prof. Geitmann anticipates that “one of the complexities we will be facing is the passion with which people or groups think about certain names because they associate them with their time at university.” The group’s task is essentially working back from an array of passionate, specific convictions to find the core general principles that could be used to effectively address almost any potential issue.

“It’s tricky,” Leckey added, “because we’re going to be speaking with people who have thought deeply on one particular issue. Our job is to listen and then ask, ‘Can you articulate the basis for this strongly held view? How do you think that will apply to other examples? What questions would lead us to the viewpoint that you’re presenting?’ It is a difficult thing that we are asking of people.”

The Working Group has already solicited written submissions from the McGill community, and will spend April reviewing those ideas and comments. The Working Group will make a draft report available by the end of summer, and in September will host town hall meetings, during which the community can respond to the draft. The fall will be dedicated to a last round of consultations before the group files its final report by year’s end.

Prof. Geitmann noted that, in addition to the many opportunities for the community at large to make their voices heard, the Working Group is actively soliciting “groups that we think would have a particular perspective on the University’s relationship with historically marginalized communities” for private conversations. These parties include Indigenous groups from both on and off campus, athletic teams and organizations, religion-based student groups, and the Black Law Students’ Association of McGill.

The Working Group is studying what’s been happening outside the McGill community as well. Of particular interest are the principles developed by a similar group at Yale University.

“The approach that they set out was a kind of nuanced one,” explained Leckey. “The point of departure was that nobody has a right to have something named after them, and that the way the university honours people is a privilege not a right. That privilege can be changed over time. I think there is a concern to not erase the past, but there is also a sense that things can change to the degree that a change of naming may become necessary.

“We won’t necessarily adopt the same principles as Yale, but it is useful to see how they constructed a set of questions that can be applied beyond any single particular case.”

Leckey noted that the Working Group is also studying how other peer universities, such as Dalhousie and Harvard, are dealing with the issue of renaming buildings in light of difficult histories. Although many governments are also wrestling with these concerns – the City of Montreal, for example, is currently deciding how to rename downtown Amherst Street, in consideration of the 18th-century namesake’s advocacy of biological warfare – he feels that “the university examples are going to be the ones that are immediately relevant.”

“There may be other examples that we will look at,” he said, “but universities are going through a period of making sure they’re being inclusive and representative in a particular way. There are some distinct features of the university context: the self-governance dimension, the commitment to learning, the attention to learning and historical accuracy. That will be our focus.”

The plaque on the side of the Bay building on Union Street stating that Jefferson Davis lived there after fleeing the US at the end of the Civil War was removed because it offended people. It was not a statue or a memorial or any type of honor. It stated an historical fact: that Canada, in addition to welcoming escaped slaves from the US, also welcomed Confederate soldiers and politicians.
Be careful not to erase history, no matter how unpleasant is may be.