As the world pauses each November to commemorate the losses resulting from wars, the numbers that are shared are so large as to be unimaginable. Even when individual  conflicts are tallied the numbers remain hard to fathom. 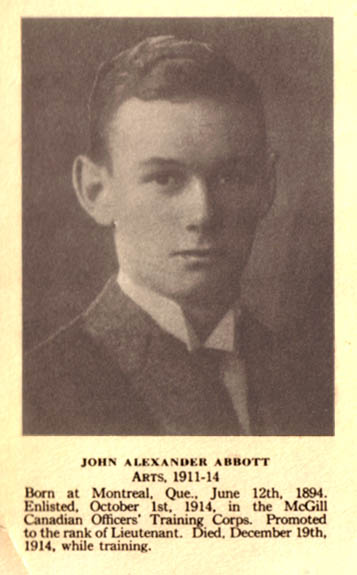 For example, the First World War (1914-1918) alone resulted in an estimated 40 million casualties. The scope of the war was so large that virtually no country was unaffected by the events. Looking at the Canadian experience alone reduces the number to a still unimaginable 61,000 deaths and 172,000 wounded.

To get a sense of the personal and private impact of these figures, one must further filter down to smaller geographic and even institutional groups. Even using McGill student, staff and faculty losses in that era still provides a substantial cadre of 365 fatalities. The impact was inconceivable to Canadians prior to 1914. With so many deaths how can one truly grasp a sense of the people who were lost?

The University’s Honour Roll, published in 1926 provides a window into the sacrifice of so many lives.  McGill’s losses ranged in age from 18 to 56 years and hailed from many parts of the world including Australia, India, the Caribbean, India, France, Argentina and the United Kingdom. Canadians came in equal measure from large cities and small towns in every region. Many served on the Western Front, Italy, Iraq and on the Russian Front.  Some served in Canada and the United Kingdom and France as support personnel but still lost their lives. Perhaps one way to understand some of these experiences would be to select the first and last McGill losses during the war.

Some may be surprised that the earliest and final McGill  wartime fatalities occurred in 1914 and 1921 in Canada. Beyond the unavoidable dangers of combat, illness and training accidents accounted for a surprising number of lives and the initial two soldiers lost in 1914 fell into this category.

Captain Alexander Campbell of Ottawa became ill at the Valcartier training camp and passed away at age 38 on October 19 of that year. In December a student – Lt. John Alexander Abbott, age 20, of the McGill Canadian Officers Training Corps – died while participating in a winter exercise on Mount Royal.

In October 1914, the Canadian First Contingent arrived in England and were been deployed on the Western Front in early 1915. In March of that year the first combat losses occurred in the Ypres Salient where poison gas was used by the German army. McGill losses were substantial from that point forward with the worst day being June 2, 1916, when 22 lives were lost in the battle for Sanctuary Wood.

Serving around the world

By November 1918 the end of the war was in sight and November 11 was negotiated as an armistice date. However, fighting continued up until 11 am, and the Canadian army lost 280 personnel in the Battle for Mons over the final two days. 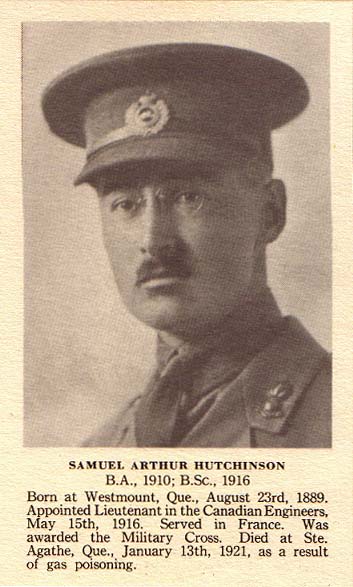 Tragically, Lt. Frederick John Longworth of Charlottetown was killed in Jemappe, just outside of Mons, on November 10. Lt. Longworth was 23 and had been a student at Macdonald College. He was seriously wounded in 1917, but had recovered and rejoined his artillery section. Another McGillian in Jemappes, Lt. Albert Kelly, noted in his diary that shelling had occurred nearby killing 40 civilians  but that the chimes of  nearby Mons could later be heard playing “Le Marseillaise.”

Many Canadians returned home from the war with both physical and mental challenges. The Honour Roll notes the final death attributable to the war as being that of Lt. Samuel Arthur Hutchinson, an Engineering graduate. Awarded the Military Cross in 1918, he was invalided back to Montreal in February 1919 suffering from the effects of poison gas and was restricted to a sanatorium until his passing at 31 in Ste Agathe in January 1921.

More than one in ten McGill community enlistees never returned from the Great War, and today even the survivors are gone. Two decades later, McGill would see the loss of a further 298 lives in World War II. In more recent years, McGill has continued to contribute its finest individuals in efforts to resolve conflicts in Cyprus, Kosovo, Eritrea, Afghanistan, Congo and elsewhere. We must always take the time to recognize their sacrifice of McGill’s Great War generation and the contributions of those who followed.

Wes, Thank you so much for this insightful and interesting article.

McGill in the First World War

Macdonald Campus Magazine tells the story of life in...

Remembering our veterans by knowing their stories