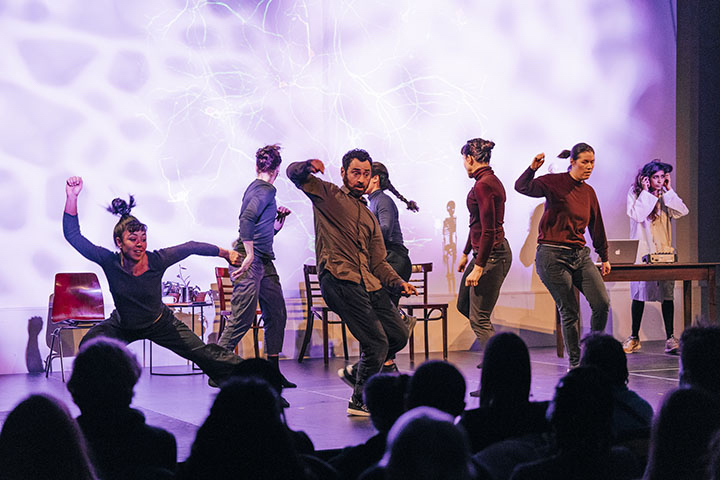 The limits of the lab

When Naila Kuhlmann came to McGill in 2017 to complete her PhD on Parkinson’s Disease, she found she was uncomfortable with how detached her work in the lab was from the lives of people living with the disorder.

“Coming out of [my] PhD, I felt a real disconnect between my work in the lab and the people my research was supposed to be helping,” Kuhlmann said.

She also noticed how little patients’ knowledge and expertise were used in guiding research and clinical care and wanted to do something to change that, but communication between scientists and patients is not always easy.

“With Parkinson’s, there’s all of this inner knowledge – the first-hand experience people get from living with the condition every day – that’s just impossible to communicate because we don’t share the same language in clinical research.” Kuhlmann wanted to find a way to bridge the knowledge gap between Parkinson’s research and those living with the disease, for the betterment of both.

Filling in the gaps

Beyond her work as a neuroscientist, Kuhlmann’s passion lies in dance and circus arts – a background that allowed her to see the potential for performing arts to support this knowledge exchange – and she founded the Piece of Mind Collective in 2018.

The Collective is an interdisciplinary team of researchers, artists and patients developing creative ways to unite research knowledge and the lived experience of illness through the performing arts. Members include dancers, circus artists, musicians, researchers and community members living with neurodegenerative diseases like Parkinson’s and dementia.

Through playful exploration, discussion and creative collaboration, each member’s experience and perspective are equally valued. The Collective has co-created performances that aim to convey the full experience of living with neurodegenerative disease, from the breakdown of neuronal function to the emotional toll chronic illness can take on an individual’s closest relationships.

Building trust and communication between parties is crucial in participatory research, a key principle of the Piece of Mind Collective’s research and creation process. With everyone working outside their comfort zones, they’re able to develop common forms of expression from the ground up.

“The artistic process can help us realize what parts of knowledge are being lost inside of scientific research based on how we frame it and communicate it,” Kuhlmann said.

Members approach composition from an interactive perspective, with stakeholders coming together to listen, discuss, improvise and refine the expression of concepts they wish to convey to the audience. In a vignette touching on the creative process behind the Collective’s piece on Parkinson’s Disease, Kuhlmann shares that she feels the spirit of the entire project is best represented in the scene Navigating the Medical World. It explores the sense of detachment that exists in doctor-patient relationships through the eyes of Collective member Anne – a Parkinson’s patient, herself.

The scene depicts a comedic interpretation of Anne receiving her diagnosis from two inattentive doctors who are seemingly less interested in her as a person than as a research subject. When Anne tries to express her reality living with the disease’s physical manifestations, the doctors turn away and intellectualize her experience between themselves. As they describe the current clinical understanding of the disorder to Anne, they begin moving around her in an undulating and unsettling way, reflecting the destabilization patients often feel when first learning about their condition.

After the doctors lead Anne away to further explain the cellular basis of Parkinson’s, they throw off their lab coats and break into The Synaptic Dance. This next scene illustrates some of the changes that occur in the brain cells of a person with Parkinson’s. Every element of the music and corresponding dance represents one of the key players in the communication between neurons. A spoken-word voiceover introduces each sub-cellular component as it is revealed though movement and melody and explains the role it plays in neuronal transmission. These elements then change over time to represent how communication between neurons degrades as the disease progresses.

This unique combination of human experience, art and science communication allows the Collective to foster insightful conversations between researchers and community members while also relaying their shared knowledge to the public.

Finding a place at HBHL

When Kuhlmann founded the collective back in 2018, it was a small group of people meeting in parks and studios – places ill-equipped for dance and acrobatic performances. As everything started coming together, Kuhlmann realized that she would need funding to continue this project while finishing up her PhD.

Stefanie Blain-Moraes, Kuhlmann’s supervisor and the principal investigator of the project, helped find a home for this original idea. “The grant from HBHL gave us the opportunity to pursue this unique, intersectoral project that does not fit traditional funding models,” explained Blain-Moraes. “The outcome is a set of two incredible performances that are exemplary uses of the performing arts to convey scientific knowledge and lived experience of neurodegenerative conditions.”

“In a very concrete way, the HBHL funding gave me a postdoc,” Kuhlmann said. “I don’t think I would have been able to do this project as a postdoctoral researcher if it wasn’t for HBHL – it’s the reason I am where I am today.”

Kuhlmann shared that the Piece of Mind Collective plans to continue developing their performances and that she hopes to use them to create interactive workshops and facilitate further community-building among those with a connection to neurodegenerative disease. She is currently preparing the results of a qualitative study looking at the impact the Collective’s performances had on audiences and how the co-creation process resulted in knowledge exchange and built empathy between participants.

Visit the Piece of Mind Collective’s Facebook page to stay up to date, and watch past performances, interviews and behind-the-scenes content on their YouTube channel. The Collective was also featured on Radio-Canada’s popular-science series Découverte (video available in French only).

Charting out a ‘Google Maps’ for the brain