McGill at “the carrefour of diverse cultural perspectives, diverse disciplines, and different ways of knowing”

Suzanne Fortier had just left the Arts Building earlier as part of the academic procession heading to Redpath Hall where she would be installed as McGill’s 17th Principal and 13th Vice-Chancellor when a young man called out to her. “Congratulations!” he said.

“Merci!” she called back with a wave and a broad smile, unable to contain her obvious joy as people lining the road to Redpath Hall broke out in spontaneous applause. Once in the Hall, Fortier would receive two extended standing ovations before the end of the Installation Ceremony.

The two-hour Ceremony was vintage McGill, with enough pomp, circumstance and bagpipes to satisfy the traditionalists, while at the same time focussing on what McGill does best – preparing the leaders of tomorrow.

This celebration of past, present and future was a common thread throughout Fortier’s 15-minute Installation Address. She opened by paying tribute to the family and friends who have supported her in her endeavours throughout the years before acknowledging the colleagues and dignitaries in attendance.

“It is a privilege to follow Heather Munroe-Blum, McGill’s first woman Principal, and to build on her decade of leadership. I am honoured that she is here today,” said Fortier. “So too am I honoured to welcome past Chancellors, Board Chairs and Principals of McGill, and, of course, our Governor General, David Johnston, who is not only Principal Emeritus but also McGill’s Visitor.”

Fortier spoke about her humble beginnings as a child in Saint-Timothée, Quebec, where her family home only had three books “the Larousse Dictionary, the Bible and the Eaton’s catalogue,” she said, “The world I grew up in was far removed from the world of academia…”

But seeing their daughter devour those three books, her parents quickly set up an account for her at the local bookstore (“Quel bonheur!,” said Fortier), unknowingly setting her on her way down the road toward McGill.

Fortier spoke about the essential lessons of acceptance and empathy that she learned in her family home, a local hotel. “People came there to dance, and they came to drink. They came to live with us when they were homeless,” said Fortier. “Even as children, it was clear to my sisters, my brother and me that others saw our home as a flawed environment in which to raise a family. We did not see it that way.

“As children, we learned to accept that we all have our flaws. We learned about respect and compassion,” the Principal continued. “Many years later, I heard the words of a great McGill alumnus, the poet, and singer-songwriter Leonard Cohen: ‘There is a crack in everything. That’s how the light gets in.’ We saw those cracks and we saw the light.”

Not surprisingly, on the day in which she was installed as McGill’s first francophone, and only second female Principal, Fortier emphasized the importance of diversity, be it cultural, intellectual or experiential. “We are at a carrefour, a time of confluence, with many things coming together in many ways. Notre place est au carrefour du savoir et de la créativité,” she told the audience. “Our place is at the carrefour of diverse cultural perspectives, diverse disciplines, and different ways of knowing.”

And while Fortier admitted that “it can be messy at the carrefour,” she stressed that this dynamic environment is essential for a university to remain vital. “We are the great collider,” she said. “And even if the collider sometimes overheats, physics tells us that this is where you find the most exotic particles, the new ideas, the new paradigms, the discoveries.”

The list of dignitaries on hand for the ceremony was long and included Governor General and Principal Emeritus David Johnston, Pierre Duchesne, Minister of Higher Education, Research, Science and Technology for the Government of Quebec and Université de Montréal Rector Guy Breton as well as a host of representatives from universities and research institutes from across North America.

“On behalf of the leaders of Canadian universities, may I welcome you as a new leader, as a new colleague and assure you of our full and entire collaboration,” Breton said. “Today we convey our crown jewel into your keeping, a crown jewel that is among the most brilliant in the university world on the planet. I know you will take the best possible care of it because I know your passion for knowledge.”

Duchesne spoke of his pride in the fact that Fortier is the first francophone to sit in the Princpal’s chair and said he is sure that he and the new Principal will share the same values and goals as she guides McGill in the future.

Representatives from McGill’s faculty, staff and student body took turns welcoming Fortier on her return to her alma mater.

“I must confess to taking great delight in the fact that you are McGill’s first female graduate to hold the office [of Principal],” said Honora Shaughnessy, Senior Executive Director of DAR, who spoke on behalf of the University’s administrative and support staff. “It has been enormously heart warming to hear you speak of your sense of coming home, of how the people you encountered as a student, embraced you, mentored you and opened up for you a world of rich possibilities… The staff for whom I speak today take great pride in the important part we play in advancing the University’s mission… We pledge our loyalty as McGill support staff in the true and full sense of the word, to protect, compliment, assist and sustain.”

A vocal opponent to the controversial Charter of Values (“The University must remain a place for the free and full exchange of ideas,” said Fortier in a statement issued in September), she ended her address with an appeal for the same open mindedness and acceptance she had learned as a child. Not surprisingly, she folded that appeal neatly within a familial anecdote about her sister’s 11-year-old grandson who, upon walking through McGill’s campus recently, boldly declared he would one day come here for his studies.

“His grand-maman challenged him: ‘You will have to have very good marks to get in, you know.’ He answered, ‘That will not be a problem.’ And when she added, ‘You will have to learn English,’ he did not hesitate a second. ‘You will see,’ he said, ‘it will not take me long.’ Born to a Brazilian mother and a French-Canadian father, that boy exemplifies the new multicultural, multilingual generation,” said Fortier. “He is ready to be challenged. He is ready to embrace other cultures, other languages and other ways of knowing. All he needs is for us to be ready for him.”

To watch the Installation Ceremony in its entirety, go here.

Click on the thumbnails below to see bigger versions of each picture. All photos are by Owen Egan. 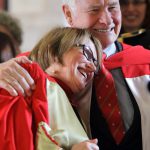 Prior to the ceremony, Suzanne Fortier gets a hug from Governor General David Johnston. 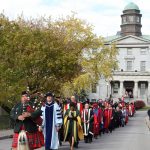 A bagpiper leads the procession to Redpath Hall. 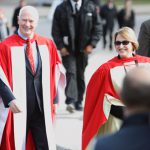 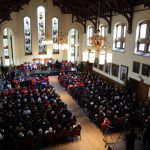 A full house at Redpath Hall. 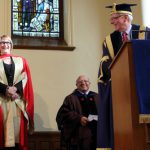 Kip Cobbett, Chairman of McGill’s Board of Governors introduces Suzanne Fortier at her installation as Principal in 2013 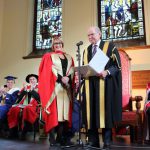 Chancellor Arnold Steinberg invests Suzanne Fortier with the office and title of Principal and Vice-Chancellor. 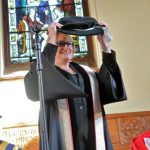 Suzanne Fortier dons the robes of Principal of McGill University for the first time. 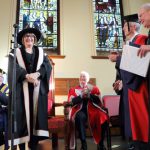 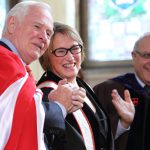 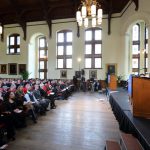 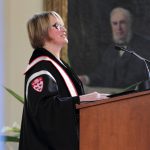 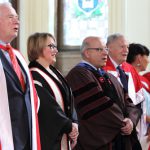 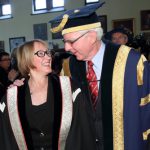 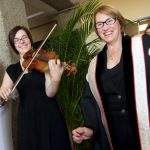 Traditional music at the reception was provided by fiddler Kate Bevan-Baker (MMus’12). 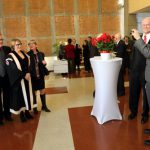 Suzanne Fortier and her siblings Murielle, Raymond and Louise, pose for her son Thomas and her husband Doug Babington.