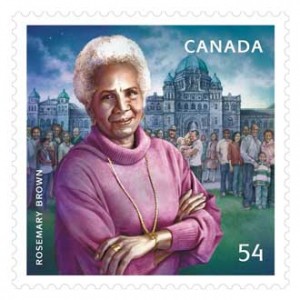 Putting her stamp on Canada

On Feb. 2, Canada Post marked Black History Month by releasing a stamp commemorating the late activist Rosemary Brown. Brown was the first African-Canadian woman elected to a provincial legislature; she served as a New Democrat MLA for British Columbia from 1972 to 1986. Born in Jamaica in 1930, Rosemary Wedderburn left home to attend McGill, lured by the myth of a discrimination-free Canada – only to discover a bigotry that was “polite, denied and accepted.” As she notes in her autobiography Being Brown, “Canada was not what I expected.” Despite many negative experiences in Montreal, Brown wrote that she was neither lonely nor unhappy at McGill. Montreal’s large, vibrant and close-knit West Indian community supported her, and McGill literature professor and novelist Hugh MacLennan proved “a kind and inspiring teacher.” A feminist and an advocate for visible minorities and the working poor, Ms. Brown later became chief commissioner of the Ontario Human Rights Commission and taught women’s studies at Simon Fraser University. She died in 2003, aged 72.

Montreal police have asked the city to make it illegal for citizens to hurl insults such as “pig” and “doughnut eater” at officers, the Toronto Star reports. “It’s questionable policy” Ronald Sklar, a McGill law professor told the Star. “There are an awful lot of words that are borderline and it’s highly subjective — it’s too vague. I don’t think the police should be any different than anybody else as far as insults go because it doesn’t affect their ability to do their duty.” Sklar said words can be punishable only if they threaten bodily harm or incite disorder.

Shirley Steinberg, a professor in the Department of Integrated Studies in Education, believes U.S. president Barack Obama is attracting a level

of attention perhaps unseen since the heyday of Princess Diana. “You’d have to go back to James Dean in terms of iconography,” Steinberg tells the National Post. “Think about the celebrity news of the past year — Britney Spears and her haircutting, Heath Ledger —nothing stuck. Even John Lennon didn’t stick like this. Obama is bigger than Brad Pitt. He’s a photographer’s dream.”