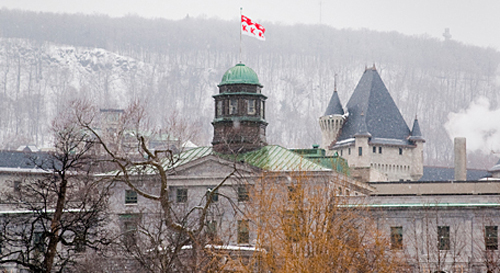 Issues of sexual assault and the communication of consent or of non-consent are complex issues that won’t be solved easily, a McGill forum on consent was told Wednesday.

Nearly 100 people gathered in the Student Centre Ballroom to hear a keynote speaker and a five-member panel discuss the myths associated with our approaches to consent when it comes to sexual relationships and more.

There were far more women than men in the room, a fact noted in the course of the discussions. This forum, prompted by McGill’s initial response to allegations of sexual assault against three former members of the Redmen football team, is the beginning of a dialogue about these issues, said Dean of Students Andre Costopoulos in introducing the session.

Keynote speaker Abigaël Candelas de la Ossa, a PhD student at Queen Mary of London University, talked of the need to move away from the “just say No” attitude of consent. In fact, that approach can actually “normalize” violence and passivity in non-consensual sexual encounters, she said.

“It doesn’t reflect a realistic way of how people communicate,” she said, observing that people tend not to issue a direct “No” when they refuse someone, and not just in terms of sex. People tend to hem and haw, find excuses for not acceding to a request.

“It’s not different for sex; it’s the way we do politeness,” she said.

But with refusal comes fear that violence or coercion will intensify. We should be questioning the perpetrator’s failure to understand, she said.

“Just say No implies that consent is given by default,” she said. “Just say No treats sex as something that someone does to someone else, not an activity undertaken by two people.

“We need a change in culture from Just say No to a ‘mutual and between equals’ view,” she said.

Each addressed some specific questions put to the panel and engaged in a discussion with participants.

The McGill trio devoted a large chunk of their time to promoting a proposed sexual assault policy for the University. McGill has policies against sexual harassment, but does not have a policy governing sexual assault, which is a criminal offence and is a matter for the police.

The object of the policy, which has yet to be made public in its entirety, would be to establish a “consent culture” at McGill, O’Doherty said, noting that consent should not be limited to sexual acts, but include anything from hugging someone to having conversations about difficult subjects. Lemieux added that we need reminders that assuming consent is not acceptable and people “need to get away from the idea that ‘it ruins the mood.’ … Consent should be a continual process,” she said.

The policy, they said, would be pro-survivor and would tackle tough questions about how to prevent contact between a survivor and perpetrator should the need arise.

Costopoulos later said that while McGill doesn’t have a specific sexual assault policy, many of the things he heard Wednesday about the proposed policy exist already in various sections of McGill policies and codes of conduct and it may be more a matter of bringing these together for enhanced clarity.

There was considerable discussion about what is described as “rape culture” both at McGill and on other university campuses where sexual assault issues have been the focus of concern and debate.

The forum was part of the University’s response to such concerns. McGill, through the office of the Deputy Provost (Student Life and Learning) is also in the process of hiring a full-time coordinator to expand programming and work in collaboration with SACOMSS, and will hold student forums on safe space every fall.