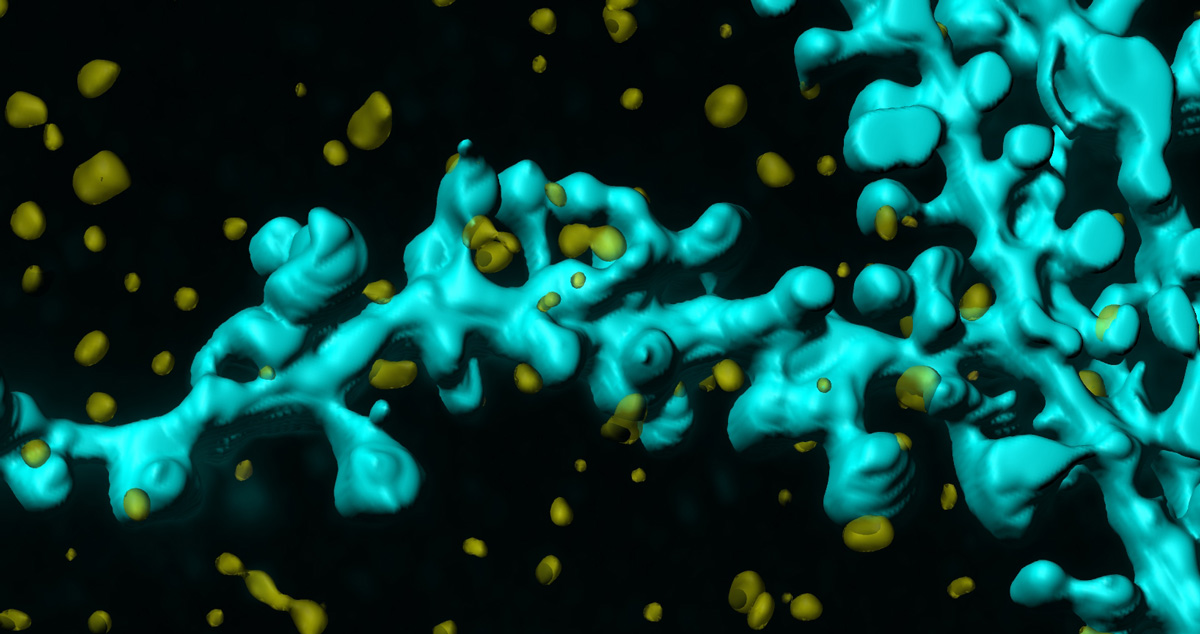 Netrin is known to help set up the healthy nervous system in an infant’s developing brain by directing brain cells to make appropriate connections with other brain cells. New research conducted by scientists at The Neuro has found that netrin in the adult brain can make neural connections stronger, which is crucial not only for learning new tricks but also for maintaining a good memory.

“It was a mystery why neurons would continue making netrin in the adult brain after all the connections had already been made in infancy,” says Timothy Kennedy, a researcher at The Neuro and senior author of the paper published in the Oct. 2 edition of Cell Reports. “We found that when a neuron is active, the activity causes it to release netrin. The netrin acts to strengthen the connection between the neuron and a neighbouring neuron at the activated synaptic junction. Netrin’s essential signal to the two neurons is ‘Make the synapse stronger.'”

Hebb’s theory on learning and memory

The notion that synaptic activity itself could influence the strength or weakness of synaptic connections was proposed many years ago by McGill’s Donald Hebb. In 1949, Hebb postulated that if one neuron helped to fire another neuron, the two neurons consequently became associated. Many neurons firing together in a correlated way then form a circuit capable of cognitive processes. Hebb’s theory offered a novel physiological explanation for processes such as learning and memory.

“We’re saying that this new molecular mechanism, which we discovered 69 years later, is central to this theory,” says Dr. Kennedy.

In 1957, neuroscientist Brenda Milner of The Neuro published a seminal paper in which she established the importance of the hippocampus for certain types of learning and memory. Much subsequent study has focussed on the hippocampus and the complex activity that occurs at the synapse.

“If you boil it down to one molecule,” says Kennedy, “the regulated release of netrin is essential for the kind of synaptic changes that underlie the changes in the neuron that are involved in learning and memory, which was what Milner was talking about.”

Stephen Glasgow, a research associate at The Neuro and lead author on the Cell Reports paper, calls the work on netrin “a huge step forward in identifying how the brain makes and stores memories. Our research demonstrates that netrin is critical for changes in the strength of connections between brain cells, and offers a new, previously undiscovered target for diseases that affect memory function.”

Although there is genetic evidence implicating netrin in many neurodevelopmental and neurodegenerative diseases such as Alzheimer’s, Parkinson’s and amyotrophic lateral sclerosis (ALS), it is far from clear how netrin might be involved.

“We’ve identified a huge target for drugs,” says Kennedy. “If you want to save memory function, an ideal thing would be to have a compound that targets key molecular mechanisms at the synapse. Recent research has shown that many synaptic connections in the adult brain are turned off, like light bulbs that are not on. They’re healthy, just not on. Perhaps there is a reservoir of synapses that can be used to change the strength of connections between neurons. We believe that we’ve found a molecular mechanism to turn on those synapses.”

Co-author Edward Ruthazer, another investigator at The Neuro, notes that “it’s particularly interesting that this synaptic strengthening appears to require the release of netrin into the extracellular space, providing a previously unknown opportunity for this signal to interact with other cells.”

Kennedy and his colleagues are now conducting experiments to see how neurons react when netrin is removed or added.

In addition to The Neuro, research for the Cell Reports article was carried out at McGill and at the CERVO Brain Research Centre of Université Laval.

Erasure of negative memories one step closer to reality