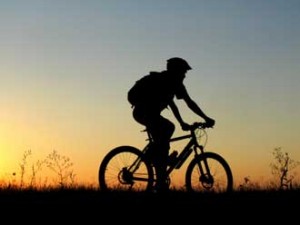 Even with some 3,000 kilometres already behind her, McGill grad Karen Schlatter still has a lot of pedaling left to finish her cycling journey from Tierra del Fuego to Paraguay – and to raise $35,000 to help the NGO CECTEC build schools, playgrounds and bathrooms in the impoverished Tava’i district of southern Paraguay. After finishing her degree in biology, Schlatter volunteered with the U.S. Peace Corps; in September 2006, she began a two-year tour in Paraguay, where she promoted sustainable agriculture through soil conservation practices. The experience opened her eyes to the poor state of education in Paraguay. “In rural areas, communities frequently lack primary and secondary schools, and children of all ages must walk from 3 to 10 miles round-trip to attend class,” the 24-year-old Schlatter recently told her Illinois hometown paper, The Pantagraph. “Many existing schools are dangerously dilapidated and do not have sanitary bathrooms or potable water, making for very poor learning environments. The average drop-out rate after the sixth grade in rural areas is over 60 percent.” Schlatter and her boyfriend, fellow Peace Corps volunteer Joel Correia, are now about a third of the way through their 9,600 kilometre bicycle journey fundraiser, which they hope to complete in June. On their blog (http://bikingtobuildschools.giving.officelive.com/), they’re tracking their progress, posting photos of their adventure, cataloguing things that have been broken (or lost, or patched) and singing the praises of collapsing into an inflatable chair after the end of a long day’s ride. The blog also includes instructions for making online donations to their cause.

While a McGill student in 1998, John Brownstein spent a semester in Africa, where he witnessed the devastation disease wreaks on developing communities. A decade later, he’s an assistant professor at Harvard Medical School – and the co-creator of a website that promises to save many lives. Brownstein and software developer Clark Freifeld have created a website called Healthmap.org. The site aggregates keyword searches in over 20,000 disparate data sources – ranging from Google News to personal accounts on the International Society for Infectious Diseases’s Program for Monitoring Emerging Diseases site to official alerts issued by the World Health Organization – then organizes the results by disease and location on an interactive map. The end goal, according to the free site, is “a unified and comprehensive view of the current global state of infectious diseases and their effect on human and animal health.” Three years ago, Brownstein and Freifeld began developing the site as an independently financed side project, but an October 2006 article in Wired caught the collective eye of Google, which now sponsors Healthmap.org. Stories that ran last week in the Calgary Herald and the Vancouver Sun credit Healthmap.org with having “revolutionized the way people find out about medical issues worldwide,” noting that the site has become a valuable resource for public health officials and international travelers.