People who only know Patch Adams through the 1998 biopic starring Robin Williams may be surprised to find out that Adams is much more than a quirky doctor who wears a clown nose on his hospital rounds. Adams is, in fact, a lifelong social activist and vocal critic of everything from capitalism and mass media, to the medical establishment and medical schools.

Adams has devoted most of his adult life to changing America’s healthcare system. He believes that laughter, joy and creativity are integral parts of the healing process, and that doctors and patients should relate to each other on the basis of mutual trust. In Adams’ model, allopathic doctors and practitioners of alternative medicine work side by side. Hardly a utopian impossibility, Adams and his colleagues have practiced medicine at the Gesundheit Institute together in West Virginia this way for over 40 years.

Adams is one of the keynote speakers at this year’s Trottier Public Science Symposium “Mind Matters: The Body-Mind Connection” (Oct. 23 – 24). In advance of his Oct. 24 lecture, Adams takes aim at a wide array of subjects in an interview with the Reporter.

I think it is equal to love. To have fun, to play, to enjoy. It’s all tied to humour. We already have a huge amount of research that shows how love, joy, humour, nature and play are all extremely health giving. And yet if you talk about play in a hospital, you’re told to go to pediatrics – and, even then, the pediatric wards are pretty stiff.

Living playfully is living well. I think of myself as the clown who is a doctor, not the doctor who is a clown. 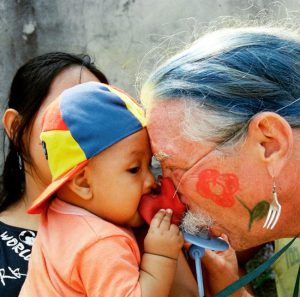 I didn’t get one lecture on humour in my four years of medical school. Not one on love, wonder, spirit, hope, passion, Maybe these things don’t fit in the business of medicine. Or maybe they’re too sensitive for science-oriented professors.

Usually in an office there is hierarchy, you don’t laugh until the person above you laughs. I would say most doctors are rude and arrogant so the idea of being goofy is demeaning to them.

If you had a magic wand how would you change our medical system?

Everything. When I started medical school 50 years ago there was nothing in a hospital that I wanted to emulate. I know your hospitals [in Canada] are a little different, but ours are just a vulgar, greedy business.

Nowhere in the world does a doctor get enough time with a patient. They barely have enough time to get basic, small amounts of info, so don’t even think about creating a meaningful relationship. My initial interview with a patient is free, in my home and four hours long.

I know nothing about the standard doctor-patient relationship. I’ve never done it.

I’ve only known how to be a doctor exactly as I have chosen to do it. I did it in medical school and when I graduated I started my own hospital. People called us The Zanies because we were crazy.

Mary Poppins, the great philosopher of the 20th century, said “In every job that must be done, there is an element of fun. You find the fun and – snap – the job’s a game.”

What are your thoughts on medical schools?

If I had to be a doctor the way my medical school taught me, I’d be a ditch digger.

I correspond with people in 130 countries and I’ve never gotten a letter from a doctor, a nurse or a student saying they love how medicine is taught. There’s lots of information but to my knowledge I haven’t found a single medical school in the world that teaches compassion.

I suggest to doctors that they fill their pockets with toys but they think that’s unprofessional. I’m not sure there’s anything about professional that I want to be.

I’d rather be free.

How did we lose the spirit of play?

It is stolen from us. The capitalist system is in charge of our educational system. Capitalism is the worst disease of history and the probable cause of our ultimate extinction. Every problem is nested in greed and power over which is the message of capitalism.

Loving is the most important thing in all of the world and not one public school in the world teaches anything about it. How weird are we?

Where is the intelligence in our modern society? It’s hard for me to find it. Eighteen percent of high school graduates in the U.S. are functionally illiterate. Thirteen years of school. What the hell did they teach?

I look at society and I see that the smart phone has made young people stupid. Not stupid as a pejorative, stupid as in they are ignorant of information and ideas. I lecture at 40 universities a year and most of these kids have trouble formulating an argument.

What do you get out of clowning?

The ecstasy of giving love. Most people are nervous around the word love – especially men. So I call clowning a trick to get a little close to love.

In a clown costume I can hug 99 per cent of the people on the planet. I can’t do that in a grey suit, and I’m not even sure I would want to. I certainly don’t own a grey suit.

One of my props is the world’s largest pair of underpants. I’ve had two presidents in those underpants. To be able to get the president of the country to put on these big underpants publicaly speaks volumes about the power of clowning and humour. 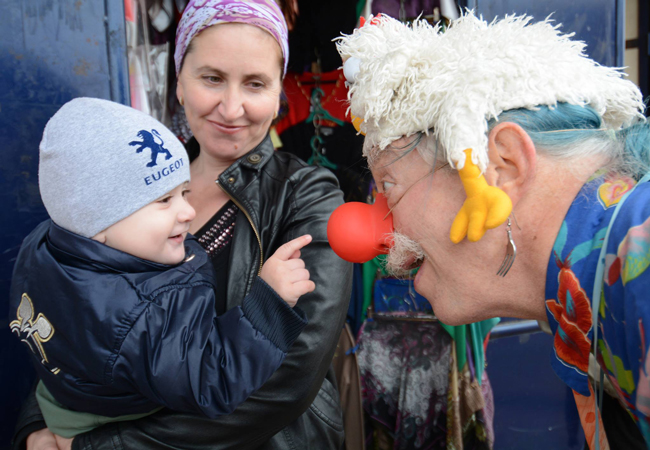 Patch Adams is a man I’d like to talk with for hours. My first question is, name a disease that doctors have cured for all of mankind. We only treat the symptoms and call it a cure.

Ending hunger – The quest to feed the world...

Saving face: Kelly Dobos on the science of anti-aging...