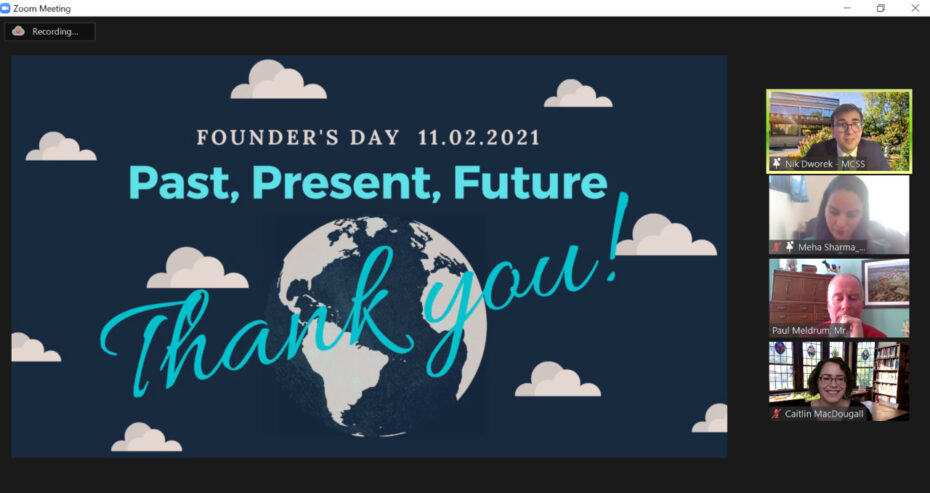 On February 11, nearly 200 members of the McGill-Macdonald community came together virtually in honour of Founder’s Day, a celebration of Macdonald Campus founder Sir William Christopher Macdonald’s mission to support higher education and cultivate the next generation of leaders. This year’s event – whose theme was Past, Present, Future – was emceed by Paul Meldrum, Manager of the Macdonald Campus Farm, and drew audiences from across the globe.

Alumnus Marc Bieler, DipAgr’58, BA’64 – who recently made landmark $15 million donation toward the building of interdisciplinary teaching, research and experiential learning capacity in the McGill School of Environment – kicked off the event with a roundtable discussion alongside McGill Principal Suzanne Fortier, and Dean of the Faculty of Agricultural and Environmental Sciences Anja Geitmann. Bieler reflected on his time spent at McGill, his career in agriculture, and the importance of supporting the University in finding solutions to the environmental challenges we are currently facing.

When asked about his outlook on the future, he said, “You have to be optimistic; yes, we face challenges, but if we aren’t optimistic, it will be a disaster. We need to find solutions.”

Following the roundtable, Macdonald Campus students – through video submissions – revealed their perspectives on the future of McGill, the Faculty, the environment and the world. Associate Professor Jeff Cardille (Natural Resource Sciences and Bieler School of Environment) then moderated a live student panel composed of Nik Dworek (U2 student, Environment), Patricia Sung (U2 student, Environment), Anikka Swaby (RD, MSc student Human Nutrition), and Philip Addo Wiredu (PhD candidate, Bioresource Engineering), who shared their hopes and fears for the future and deliberated over how to move from feelings of hope to actionable change.

Finally, it would not be Founder’s Day without acknowledging the hard work and contributions of Macdonald Campus staff and students.

This year, Human Resources Advisor Danielle Côté – who has spent 25 years guiding and supporting Faculty of Agricultural and Environmental Studies employees through the different stages of their careers – was the recipient of the Macdonald Campus Award of Excellence for Administrative and Support Staff. The award recognizes outstanding performance and contributions to the Macdonald Campus and community both in the execution of their duties and in the effort and commitment towards service.

“Danielle has one of the most difficult jobs in our faculty, balancing the application of the University’s HR policies and regulations against the best interest of the employee–this is no small feat,” said presenter Christine Butler, Director of Academic and Administrative Services, who also added.  “She’s thoughtful, thorough, judicious and fair in everything she does.”

The Macdonald Branch of the McGill Alumni Association selected seven exceptional recipients of the Gold Key Award in recognition of their leadership and excellence in the promotion and development of extra­curricular activities at Macdonald, to the benefit of the Macdonald community as a whole. The 2021 Golden Key recipients include:

Mohammed Antar, Ph.D. Candidate, Department of Plant Science Through his roles in the Macdonald Campus Graduate Student Society (MCGSS) and the Association of Graduate Students Employed by McGill University (AGSEM), Mohammed has established himself as a respected representative of his peers in the university community, ensuring a collaborative link between the Macdonald graduate student body and the Faculty Administration. Mohammed has also shown a deep commitment to addressing issues related to diversity, equity and inclusivity in his role as a member of the Faculty Planning committee, as well as in his role as the liaison between the local IGA and the campus community, helping to distribute food donations to those in need. A talented organizer, Mohammed has been heavily involved in organizing Hot Bagel Breakfasts, movie nights, trivia and game nights for the graduate student community, and volleyball and soccer intramurals.

Mary Bergen, BSc (AgEnvSc)’20 MSE. Mary has actively participated in university life, first as a volunteer international student buddy and peer mentor, and later as President of the Macdonald Campus Student Society (MCSS), where she created a more visible and interactive relationship between the MCSS and the greater student body. An advocate for student health and well-being, Mary also collaborated with Student Services to organize a seminar series on mental health awareness. In her time at McGill, Mary has also dedicated herself strengthening the relationship between MCSS and the McGill Office of Sustainability – raising awareness of the multitude of sustainable efforts being carried out on the Macdonald campus – and was instrumental in the organization of the Climate Strike protests for the Macdonald campus undergraduates in the fall of 2019.

Nik Dworek, U2 Environment. In his various roles in the MCSS–from elected a member at large on the MCSS to current President – Nik has done everything from organizing student activities and represented their concerns to actively participating in the Memorandum of Agreement discussions with university administration. He has been instrumental in raising awareness of the Divest McGill movement on the Macdonald Campus, has represented student concerns with regards to COVID-19, and has worked diligently with Dean Geitmann to helped coordinate the administration’s emergency committee to shed light on student needs.

Sourour Harfouch, U2 Dietetics. A former committee member of DHNUS (Dietetics and Human Nutrition Undergraduate Society) and current President of the McGill Global Food Security Club, Sourour has been described by many of her nominators as “a driving force in resurrecting the GFS club”, believing the GFS organization should be actively engaged in education and service roles aimed at alleviating global health disparities. She dedicates her time to CIME– a club that devotes their time and resources to helping asylum seekers – as well as to raising awareness about food insecurity through food drives, educational booths and events, including organizing the 75th anniversary of the Food and Agriculture Organization (FAO) at Macdonald Campus in 2020.

Leela Riddle-Merritte, U3 Global Food Security. In her roles as VP communications and most recently VP external with the MCSS, Leela has undertaken many large projects – including the difficult task of re-writing the MCSS constitution to improve its transparency and legibility – and also led the efforts to obtain provincial accreditation for the MCSS as a student body, which is now recognized as an official student group and protected by government regulations. As a student senator and member of the Racialized and Ethnic Senate sub-committee, she has worked to assist McGill student groups’ solidify their commitment to help improve racial equality, while making the institution more aware of the racial inequalities that exist within its boundaries.

Keel Scruton, U3 Bioresource Engineering. Keel, as a former Business Operations committee member and current VP Finance for the MCSS, assists the committee in overseeing the financial operations of the student society. In these roles, he has carried out a detailed analysis of the MCSS budget and is always looking to improve the efficiency of spending. As such, he created a new club funding system that reduced the time required for MCSS to process club budget requests by 50%, while also managing to reduce the society’s budget deficit from $50,000 per year to the current $5,000 per year, and expects to have a balanced budget very soon. When he’s not dealing in finances, Keel acts as the voice of the Macdonald Campus undergraduate student body on the Board of Governors.

Meha Sharma Ph.D. Candidate Plant Science. Described as kind-hearted, bright and cheerful, Meha – the current President of the Macdonald Campus Graduate Students’ Society (MCGSS) and recipient of a Schulich Graduate Fellowship – has always been focussed on improving grad student engagement and the well-being of her colleagues throughout her time at McGill, organizing countless events for her peers and volunteering as an International student buddy for new graduate students. Meha and her executive team continued to find ways to serve incoming students during the COVID-19 pandemic, creating an informative video tour of Macdonald Campus and highlighting newly implemented campus safety measures while also sparking a new initiative that sees care packages distributed to new student arrivals.