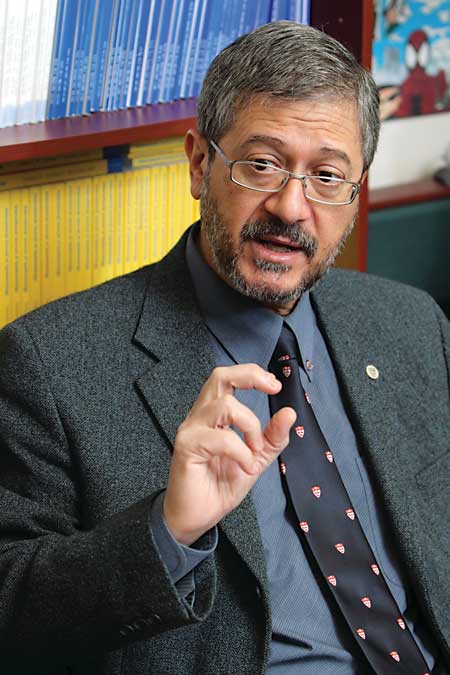 Oral human papillomavirus (HPV) infections were more common among men who had female partners with oral and/or genital HPV infection, suggesting that the transmission of HPV occurs via oral-oral and oral-genital routes, according to a McGill University study published in Cancer Epidemiology, Biomarkers & Prevention, a journal of the American Association for Cancer Research.

“Understanding how HPV is transmitted is important because it will help us identify who is most at risk for HPV infection and how we can help them protect themselves and their partners,” adds Franco, who is also the Chairman of the Department of Oncology in the Faculty of Medicine. “Our work provides additional evidence that HPV is sexually transmitted to the oral tract through oral-oral and oral-genital contact.”

A research team led by Franco looked at HPV infections in 222 men and their female partners and found that among men in the study, the prevalence of oral HPV was 7.2 percent. These numbers were higher for men who were smokers (12.2 percent), those who were in non-monogamous relationships (17.9 percent), and those who had a partner with oral HPV infection (28.6 percent) and/or genital HPV infection (11.5 percent).

Of the 222 men included in the analyses, 130 had a partner with a genital HPV infection.

The prevalence of HPV16, one of the most common cancer-causing HPV types, was 2.3 percent among all men who participated in the study, and 6.1 percent among the 33 men who had partners with a genital HPV16 infection.

Participants were from the HPV Infection and Transmission among Couples through Heterosexual Activity (HITCH) study conducted at McGill and led by Franco. Young female students, ages 18 to 24, and their male partners were recruited to the study between 2005 and 2011. Participants completed a questionnaire about their sexual history and provided oral and vaginal or penile/scrotal samples. The researchers analyzed the samples for the presence of 36 mucosal HPV types.

None of the 52 men who never smoked cigarettes, were in a monogamous relationship, and had a partner without oral or genital HPV, had a HPV infection.

Excellent article,further reason to vaccinate at any age!