McGill Urban Planning students are evaluating a new route that would run between Trudeau Airport and downtown Montreal in 30 minutes via Ville Saint-Laurent. Estimated cost for the project: $815 million.

Now that the project to improve public transit service between Trudeau Airport and downtown Montreal is back on track, the borough of Saint-Laurent has put forward a proposal for a light train that would travel through its territory, specifically via Technoparc Montréal, just north of the airport.

The industrial sector of Saint-Laurent and Dorval is the second-largest employment hub on the Island of Montreal, after the downtown core. The vast majority of workers – 86 percent – drive to work there, causing considerable congestion problems. The new route would serve the sector, which is part of the western economic hub and accounts for a total of 327,000 jobs. 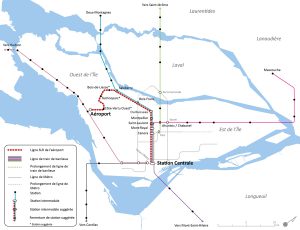 “We have 7,000 jobs in the Technoparc alone, and we’re planning to double that number over the next 10 years, notably through the deployment of the Éco-Campus Hubert Reeves, which focuses on clean technologies and sustainable development,” says Saint-Laurent Mayor Alan DeSousa. “To promote this type of development in Montreal, we need to make sure we’re filling the needs of companies, and that includes transportation. The route we’re proposing would be optimal and profitable.”

The students looked at three routes suggested by the borough. Among the factors they examined were accessibility to the proposed stations for drivers, accessibility for pedestrians, proximity to sites with development potential, travel time, certain criteria related to safety and the environment, and of course cost.

The students estimate construction costs for the optimal route at $815 million. “The project is advantageous in terms of cost-benefit ratio, since it’s largely based on existing infrastructures owned by the Agence métropolitaine de transport (AMT) and a branch line it has an option to buy,” says Vincent Poirier, one of the students who worked on the study.

All three routes include a section of the AMT commuter train line from downtown to Deux-Montagnes, branching out to the south from the Doney Spur near autoroute 13 to reach Technoparc Montréal and the aeronautics companies located near the airport.

“The route we’ve identified as optimal passes to the east of the runways at the airport. Originally, it headed back west along Côte-de-Liesse, but we’ve moved it a little farther north so it runs along Côte-Vertu instead. That makes the trip shorter so more workers would take that route,” adds Poirier.

An express service would stop at only five of the 12 stations, meaning the trip between the airport and Central Station downtown would take just 30 minutes.

“The five stations would be located so that passengers could easily connect with other lines in the AMT network or new metro stations currently on the drawing boards,” says Alexander Legrain, another of the students in the group. “For example, the stations would give workers arriving from the north (the Saint-Jérôme line) or the east (the Mascouche line) the opportunity to take public transit to Saint-Laurent or Dorval rather than having to drive along Highway 40.”

What a shill job. The real and only solution to the aiport question is a simple (and much less expensive!) spur from the AMT VH line… which what the airport station shell at YUL was designed for originally. Electrifying track on the VH line, adding the spur and increasing frequencies would turn it into a viable rapid transit solution for the west island that actually serves its population centres: St. Anne, Baie D’Urfe, Beaconsfield, Pointe-Claire, Dorval, Lachine, Montreal-West… Increasing the frequency of trains on the Deux-Montagnes line, connecting the Orange line to Bois-Franc and increasing the network of feeder buses… Read more »