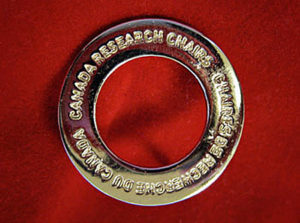 New chair holder Sarah Harrison, who holds joint appointments in the Departments of Mathematics and Statistics, and Physics, will continue her investigations in string theory, a theoretical framework that proposes a unified description of all particles and forces in nature, including gravity. Among the questions Professor Harrison explores, the mysterious relationship in mathematics between finite groups and modular forms (ominously named “monstrous moonshine”), which appears to have deep connections to physics and string theory.

“All Canadians benefit from the federal investment in the CRC program, from new discoveries and technological innovations to training the next generation of scientists and scholars,” said Martha Crago, Vice-Principal, Research and Innovation. “The commitment of the CRCs to the pursuit of their research ambitions leads to advances in all disciplines.”‎

McGill’s Professor Frank Elgar, one of McGill’s renewed Tier 2 Chairs, will use the federal investment to continue tackling health and social inequities that begin in early childhood for those born into a lower income group. His research has shown that, despite the dramatic advances in health and life expectancies in recent years, five- to ten-fold differences in the rates of some illnesses and a 10-year gap in life expectancy persists across different levels of socioeconomic status.

Under the CRC Program, universities have the opportunity to nominate outstanding researchers, like those granted CRCs today, for professorships in areas that will further and inform McGill’s renewed strategic research plan. By investing in high-potential researchers, the CRC program seeks to counter the Canadian brain drain, fueled by increased international competition for top talent and the greater mobility of highly qualified researchers.

The program is a tri-agency initiative of the Social Sciences and Humanities Research Council (SSHRC), the Natural Sciences and Engineering Research Council (NSERC) and the Canadian Institutes of Health Research (CIHC).  There are two types of Canada Research Chairs. Tier 1 Chairs are tenable for seven years and renewable. Each Tier 1 Chair is valued at $200,000 annually. Tier 2 Chairs, valued at $100,000 annually for five years with one opportunity for renewal, are for exceptional emerging researchers, acknowledged by their peers as having the potential to lead in their field.

Granted in this round to McGill, eight new Tier 2 Chairs and one new Tier 1 Chair, as well as four Tier 1 and 2 renewals.

The complete list of McGill’s CRCs awarded in this round: