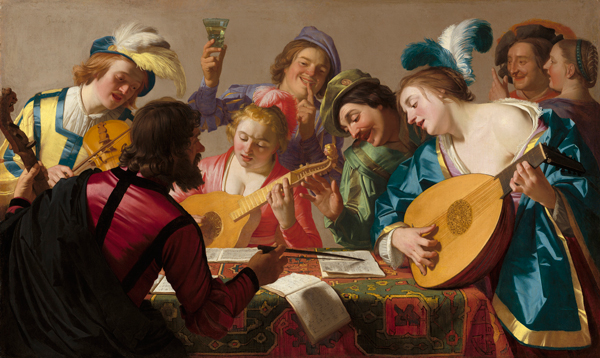 Whether you are a Pygmy in the Congolese rainforest or a hipster in downtown Montreal, certain aspects of music will touch you in exactly the same ways. A team of researchers from McGill, Technische Universität Berlin, and the University of Montreal arrived at this conclusion after travelling deep into the rainforest to play music to a very isolated group of people, the Mbenzélé Pygmies, who live without access to radio, television or electricity. They then compared how the Mbenzélé responded both to their own and to unfamiliar Western music, with the way that a group of Canadians (in not-so-remote downtown Montreal) responded to the same pieces.

The researchers explain, in a recent article in Frontiers in Psychology, that although the groups felt quite differently about whether specific pieces of music made them feel good or bad, their subjective and physiological responses to how exciting or calming they found the music to be appeared to be universal.

The researchers arrived at this conclusion by playing 19 short musical extracts (11 western and 8 Pygmy) of between about 30 and 90 seconds to forty Pygmies in the Congo and then to forty Canadians in Montreal. Because all the Mbenzélé Pygmies sing regularly for ceremonial purposes, the Canadians who were recruited for the study were all either amateur or professional musicians.

The music from western culture was designed to induce a range of emotions from calm to excited, and from happy to anxious or sad, and included both orchestral music and excerpts from three popular films (Psycho, Star Wars, and Schindler’s List). The Pygmy pieces were all polyphonic vocal pieces that are fairly upbeat and tend to be performed in ceremonial contexts to calm anger, or express comfort after a death, for example, or to bid good fortune before a hunting expedition leaves the village, or even to pacify a crying child.

The researchers used emoticons with smiling or frowning faces at each end of a continuum to get people to identify whether the music made them feel good or bad. They also asked participants to rate whether the music made them feel calm (close-eyed emoticon) or excited (open-eyed face). As the participants listened to the music, various measurements were taken (such as heart rate, rate of respiration, and quantity of sweat on the palms) to give researchers a more complete picture of the participants’ responses to what they were hearing.

“Our major discovery is that listeners from very different groups both responded to how exciting or calming they felt the music to be in similar ways,” says Hauke Egermann, who is currently based at the Technische Universität in Berlin but did part of the research as a postdoctoral fellow at McGill. “This is probably due to certain low-level aspects of music such as tempo (or beat), pitch (how high or low the music is on the scale) and timbre (tone colour or quality), but this will need further research.”

Purpose music serves may influence our emotional response to it

The main difference between Pygmy and Canadian listeners was that the Canadians described themselves as feeling a much wider range of emotions as they listened to the Western music than the Pygmies felt when listening to either their own or Western music. This is probably attributable to the varying roles that music plays in each culture.

“Negative emotions are felt to disturb the harmony of the forest in Pygmy culture and are therefore dangerous,” says Nathalie Fernando of the University of Montreal’s Faculty of Music, who has been collecting and documenting Mbenzélé music-making for 10 years. “If a baby is crying, the Mbenzélé will sing a happy song. If the men are scared of going hunting, they will sing a happy song – in general music is used in this culture to evacuate all negative emotions, so it is not really surprising that the Mbenzélé feel that all the music they hear makes them feel good.”

“People have been trying to figure out for quite a while whether the way that we react to music is based on the culture that we come from or on some universal features of the music itself,” says Stephen McAdams, from McGill’s Schulich School of Music. “Now we know that it is actually a bit of both.”

Measuring creativity, one word at a time

Most rivers run dry – now and then