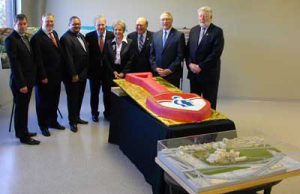 A key step toward the construction of a new McGill University Health Centre at the Glen Yards was taken April 1, as Premier Jean Charest, flanked by cabinet ministers and MUHC and McGill leaders and Mayor Gérald Tremblay, announced to a crowded room the selection of McGill Health Infrastructure Group, a consortium led by SNC-Lavalin Inc. and Innisfree Ltd, as the private-sector partner for the $1.3-billion project.

“The train has left the station,” said MUHC Board chair Senator David Angus, who was emcee for the event.

The announcement marks the last hurdle the long-awaited project has to overcome. Work now begins on building the campus that will bring the Royal Victoria Hospital, the Montreal Children’s Hospital and the MUHC Research Institute to the same site, near the Vendôme metro station, along with the Shriner’s Hospital. It is scheduled to be completed by the fall of 2014, having been the victim of numerous setbacks and government-imposed delays at various stages ever since the site was identified as the location for a new MUHC hospital 12 years ago.

The delays were all but forgotten in the ebullient mood that marked Thursday’s event.

“McGill and the MUHC are recognized worldwide,” Charest said. “Thank you on behalf of all Quebecers for giving Quebec such a renowned level of medical care.” The Premier went on to lavish praise on McGill, the Neuro, and Montreal’s medical research and health care in general, pointing out that Montreal and Quebec need both the MUHC project as well as the new hospital to be built for the Université de Montréal’s network, known as the CHUM.

McGill, he said, has played an extremely important role as an ambassador throughout the world. “In New York or Mumbai or Davos or Paris, McGill University is a flagship for us,” Charest said.

“Today is a day of monumental pride,” Porter said. “Pride for the new era of academic medicine we are creating together … [leading to] the highest levels of quality, safety and scientific outreach… to shift the balance from illness to wellness.

“We mustn’t lose sight of our raison d’être,” he said. “We must ensure we have truly the world’s best health care right here in Quebec.”

Principal Heather Munroe-Blum, who attended the ceremony and joined in a symbolic indoor sod-turning when political protesters outside the KOSA hall scuttled plans for an outdoor event, said the announcement is a pivotal moment in health care and science for Quebec. “It gives me great pride to have McGill as part of such an outstanding project that will benefit countless people, here at home and, indeed, around the world,” she said in a statement released Thursday.

Members of the McGill Health Infrastructure Group have directed or played a key role in hundreds of healthcare buildings and major infrastructure projects worldwide, using both PPP and conventional models of delivery. Quebec-based SNC-Lavalin is one of the world’s leading engineering, procurement, construction and technical services organizations while Innisfree currently manages more than 50 PPP projects worldwide valued at more than $15 billion. The design team also has more than 95 years of collective expertise in award-winning architecture and pertinent experience in LEED® accreditation, healing environments, wayfinding, urban planning, and landscaping.

Richard Levin, Vice-Principal (Health Affairs) and Dean of McGill’s Faculty of Medicine, said he is anxious for the Group to start work. “I have to say that today I’m an impatient man,” he admitted. “I can’t wait to see what will be developed in this great new hospital, both in terms of how we can improve the care we give our patients and the vital research work we will be able to do here to take on and even defeat the world’s most serious diseases. Our faculty are eager to work in a cutting-edge health centre, and eager to expand their knowledge and skills by having access to better facilities, better equipment and better communication that will all be possible in the new MUHC.”

Charest was unfazed by the length of time the project has taken to come to fruition, pointing out that it took 15 years to complete the Georges Pompidou Hospital in France.

“Today we have proof that things move in Montreal,” Tremblay told the crowd at the KOSA centre.

The dignitaries trooped upstairs to be photographed in front of a shovel-shaped cake bearing the MUHC logo.

“On behalf of McGill, let me say how delighted I am to congratulate our colleagues and partners at the MUHC,” Munroe-Bloom said in her statement. “So many people have worked so very hard to get to this very exciting project to this point. It is a pivotal moment in health care and science for Quebec. We stand poised at the beginning of an extraordinary new era, one that will be marked by ever more rapid and significant developments in health science and medical treatment, many of which will happen at the world-class facility we are about to build.”