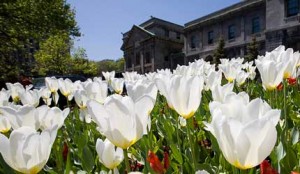 While red may be the official colour of McGill, it would seem that we have an increasing penchant for green as well.

McGill’s strong commitment to campus sustainability was recognized earlier today with the announcement that the University has been selected to the annual list of Canada’s Greenest Employers, as chosen by the editors of the Canada’s Top 100 Employers project. Thirty organizations across Canada have been singled out for honours this year.

“These employers lead the nation in bringing environmental values into their culture,” says Richard Yerema, Managing Editor at Mediacorp Canada Inc. “We were impressed by the range of initiatives they have undertaken, as well as their top-level commitment to environmental values even in challenging economic times.”

The selection committee praised McGill for both its environmental initiatives and the speed with which the University has changed campus culture. Included among the highlighted initiatives was the establishment of an Environmental Officer, Kathleen Ng, and the ongoing Rethink McGill strategy that encourages employees, faculty and students to explore ways to reduce the university’s energy consumption.

“Kathleen has really pushed these issues over the past years. It is really great that she’s finally getting some recognition,” said Dennis Fortune, McGill’s Director of Sustainability. “We have reached a point where sustainability is part of our image and what we do as standard practice.”

The University also earned kudos for increasing its use of recycled-content paper from zero to 33 per cent of paper used in daily operations; the elimination of paper telephone directories; and the expansion its on-campus recycling program – all in the past two years.

In terms of infrastructure, McGill, already a member of the Canada Green Building Council, was commended for ongoing initiatives to incorporate new “green” building standards into its building operations, renovations and new construction – including the installation of a state-of-the-art geothermal heating system at Lady Meredith House.

“In challenging economic times, these organizations remind us that environmentalism is not a flavour-of-the-month,” says Tony Meehan, Publisher of the Canada’s Top 100 Employers project.

“These organizations are more flexible, waste less and attract similar-minded employees and clients, making them more likely to succeed when resources become scarce.”

Maclean’s magazine, announced the 2009 winners in its special April “green” issue. A full list of their projects and the editors’ detailed Reasons for Selection can be viewed at: www.CanadasTop100.com/environmental