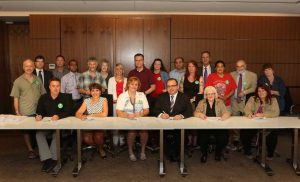 Both sides look forward to rebuilding relationships, working together

McGill and the MUNACA/PSAC union that represents about 1,700 support staff at the University signed their new Collective Agreement today (Tuesday, June 19), bringing to an end a lengthy process of ironing out details of a deal reached last December.

Both sides expressed their happiness to have brought the Agreement to a conclusion and their hopes for building stronger communications and relationships in the future.

In the interim, while the University and the union spent several months ironing out the finer details of the accord in its final texts, McGill moved ahead in late May to announce that it would go ahead and pay the union members the back pay they were owed, even though the agreement itself had not yet been signed. That pay began showing up in paycheques last Friday and the catching up will continue into July.

“I would like to express my thanks to all those who worked many long hours to make this happen,” Vice-Principal (Administration and Finance) Michael Di Grappa said at the signing ceremony. “I look forward to working with each and every one of you to rebuild relationships” and move into ‘a new era’ of co-operation in the days ahead.”

Magali Picard, Regional Executive Vice-President of the Public Service Alliance of Canada, with which MUNACA is affiliated, said she was very encouraged by Di Grappa’s words and said it is essential to rebuild bridges after a long conflict.

Kevin Whittaker, president of MUNACA/PSAC, said at the signing ceremony in the James Administration Building that he was very pleased the administration is open to a new approach to communication with the union.

“I hope that the past is past,” he said.

Both sides have pledged to work together to implement the agreement and training sessions for Human Resources Advisors who will apply the new agreement will begining shortly.

In a message to the McGill community, Di Grappa noted that, “this Agreement represents one of several labour negotiations we are engaged in at the moment. McGill, as a large employer, negotiates with 13 different groups at various times and we are proceeding with a number of negotiations that are at various stages of completion. These negotiations will continue into the summer and fall, according to normal schedules.

“We will continue to work to maintain the conditions that have made McGill one of Canada’s Top 100 employers over the last four years,” he said.