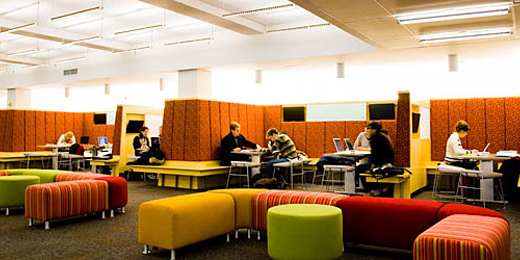 They are the places where minds meet, says Trenholme Dean of Libraries Colleen Cook, and McGill’s are in serious need of an upgrade.

As this academic year comes to a close, so, too, do the preliminary stages of a massive feasibility study that will point the way to the libraries of the future that should serve the University’s academic mission for the next 50 years or more.

The study, which has involved extensive consultation with hundreds of members of the community, including students, teachers, researchers and staff, has narrowed down some options as to how the University can bring its libraries up to current standards – and beyond.

“We essentially have no choice but to so something,” Cook said, indicating that the preferred option will be made public in the fall, when the results of study will be presented to the community, including a presentation for information to Senate at first.

A few details about that preferred option are known. It will be in line with Principal Suzanne Fortier’s five priorities. It will likely be phased in over the period of a five to 10 years and cost somewhere north of $150 million (“ambitious but prudent,” is how Cook would describe it). It will involve an underground, onsite robotic storage facility so that print material, both current and rare, can be kept within reach but without taking up valuable study space, which is what students want. It will maintain the existing network of library branches and not force the relocation of staff.

If the cost seems high, consider that it would likely cost about $200 million just to rip down and rebuild the McLennan building that houses the Humanities and Social Sciences Library. Instead, the inside of McLennan will be extensively reshaped to provide vastly more study space, and the adjacent Redpath Library Building will be even more extensively changed to provide a variety of spaces, from study and reception spaces to display and event spaces, while being reshaped on the outside to reveal more of the south end of Redpath Hall and provide easy passage from McTavish Street to the lower campus as well as better connections to McLennan. The renovations and reconstructions would provide a chance to showcase heretofore hidden collections of rare materials and art, Cook said.

Essential print materials will still be housed on shelves to meet the needs of students and faculty, but far fewer of them. Stored books will be retrievable within minutes. Huge savings can be realized here. It costs 86 cents a year to store a book in high-density storage vs. $4.26 per year on open shelves, according to the Council of Library and Information Resources.

“We’re maintaining the centrality of the library as the heart of the University nestled in the centre of the downtown campus,” Cook said. “Libraries have historically been the focal points of universities and we feel it is important to maintain that tradition even as we move forward with a more modern vision of what a library means to the University.”

Learn more about the feasibility study.