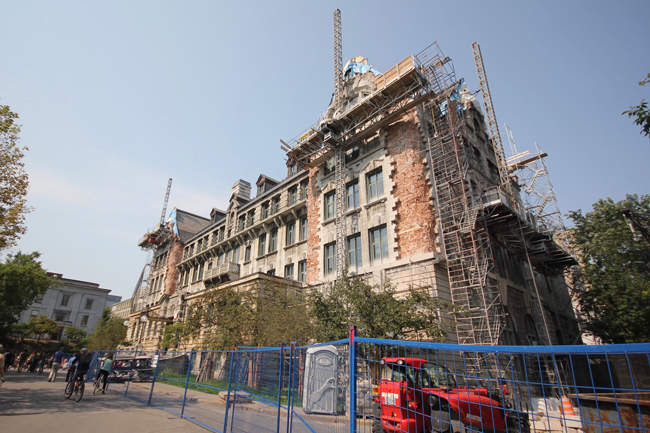 A government of Quebec audit of university buildings four years ago established that about three quarters of McGill buildings are in need of major repairs or upgrades. Several of them, for example, have a deteriorating façade.

Though the level of deterioration of the masonry varies from one building to the next, the source is generally the same: water, in particular the ever-increasing number of freeze-thaw cycles resulting from climate change. When water seeps into the stone and then freezes, its volume expands, creating or enlarging cracks, which then leads to even more water infiltrating the stone.

The Macdonald Engineering Building, rebuilt in 1908 after the original structure burned down, is a good example. Although the building remains safe, both the exterior stones and the brick backing walls underneath are damaged.

“During exploratory surveys, pieces of stone were easily removed by hand by our consultants, which showed a clear symptom of the building envelope’s condition,” explains project manager Juan Gamarra, of the WSP firm. “Water infiltration has also corroded the steel anchors that hold the stones to the backing wall in certain areas.”

The stones covering the brick wall need to be carefully removed in order to repair the backing wall. When the stone cannot be reused, it has to be replaced. Also, mortar joints have to be fully redone. This work started in the spring, which explains the exposed brick walls you can see at the moment. Where required, up to two of the nearly six layers of brick need to be replaced.

Additionally, the roof on two of the building’s wings will be replaced. Though the roof of the third wing (Macdonald wing) was replaced in 2013, this project includes the addition of downspouts that will carry water away from the façade and help improve the roof’s rainwater management properties.

Building structure and use added considerations

Renovating a building that has heritage value already presents its share of challenges, such as restricting the type of materials that can be used, for example. In the case of Macdonald Engineering, the building’s structure also contributes to the complexity to the project. For example, a significant portion of the building’s weight is carried directly by the exterior walls, and not interior columns, which means that before proceeding with the dismantling of the stone and brick layers, interior supports (in the form of metal posts) must be installed next to the intervention areas.

The fact that the building houses some research laboratories also had to be taken into consideration. The mechanical scaffold, for example, transmits vibrations each time the scaffold is moved up or down. Fortunately, the contractors were able to put in place measures to ensure vibrations did not exceed the levels that the research equipment can tolerate.

“These included the modification of the scaffold system to bring vibrations down to that established baseline, combined with adding weight to the tables where particularly sensitive equipment is installed, therefore allowing the coexistence of research and construction. The cooperation of the users since the start of the project has been remarkable,” Juan Gamarra says.

The magnitude of the Macdonald Building masonry restoration project is such that it will spread over two years. Some sections will be done by later this fall while the remainder will start next summer and last into 2019.

My favorite building on campus is Macdonald Stewart. Sad to see it propped and draped the last few years. when will restoration start?

Restoration of the Roddick Gates