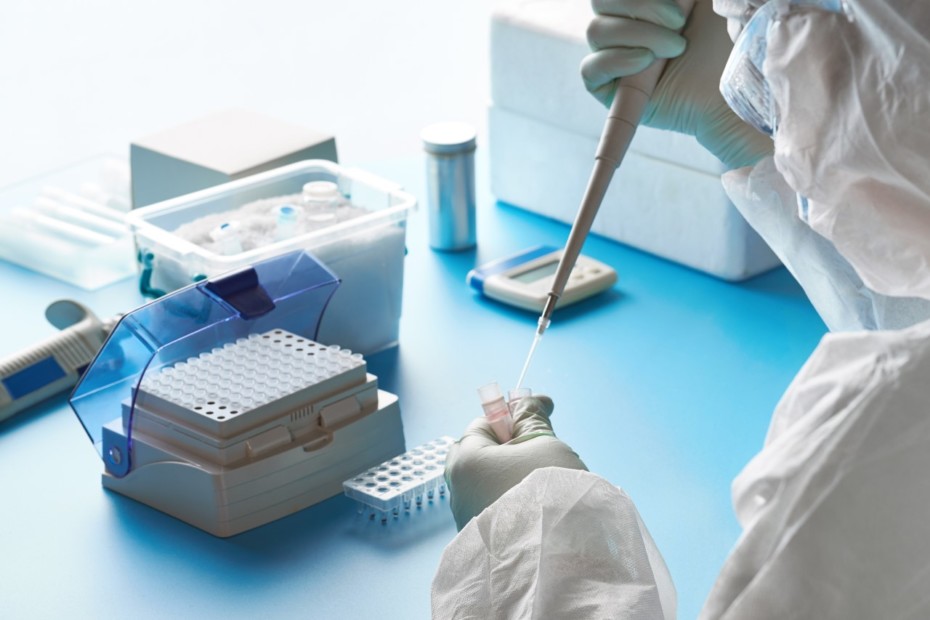 When a pair of old hockey buddies and McGill biomedicine scientists realized that test shortages could hamper Canada’s efforts to get COVID-19 under control, they didn’t hesitate: “We can help with that.”

After two months of determined effort, the McGill “made-from-scratch” version of the gold-standard laboratory test for the SARS-CoV-2 coronavirus is nearly ready. The test is developed by a large team of scientists led by Dr. Martin Schmeing, Director of the Centre de recherche en biologie structurale (CRBS) at McGill University and Dr. Don van Meyel, Director of the Centre for Translational Biology (CTB) at the Research Institute of the McGill University Health Centre (RI-MUHC). Thanks to a productive partnership with the National Research Council of Canada (NRC), and now with crucial funding from Innovation, Science, and Economic Development Canada (ISED) announced on May 26, the project includes development of procedures to make all the essential components of the tests at a national scale here in Canada. The tests could be available to Canadian testing labs within months.

“There are no made-in-Canada RT-PCR (reverse transcription polymerase chain reaction) tests,” says Dr. Schmeing. “They’re mainly being made by multi-nationals and could be diverted away from Canada. So we want to help by making these tests domestically and making it possible for Canadians – including health care workers, students and everyday Canadians – to be tested on a larger scale.”

The researchers couldn’t sit by and watch. “We feel that decisions about who and when to test in Canada should be driven by strong science and public health policy, not by limitations in the number of tests available” says Dr. van Meyel.

The project was first launched two months ago thanks to funding from the McGill Interdisciplinary Initiative in Infection and Immunity (MI4), supported by the MUHC Foundation, as well as funding from McGill’s Faculty of Science. “Without them, we wouldn’t be where we are,” says Dr. Schmeing. “Their early support has been absolutely crucial.”

The project was originally rather more modest in scope, if not less complex, with an aim of producing 15,000 tests per week at McGill. Drs. Schmeing and van Meyel were encouraged by colleagues with expertise in infectious disease, like MI4’s Dr. Marcel Behr, to aim instead for millions of tests, to help make Canada self-reliant for the duration of this pandemic – and the next. The initial test should be ready to send to the National Microbiology Laboratory in Winnipeg for verification in the next couple of weeks, paving the way for ramp up to the national level.

“We could do this. We make enzymes and run reactions, that’s our job.” That remark, by one of Dr. Schmeing’s colleagues from CRBS early in the pandemic, had the effect of a jolt. Dr. Schmeing had had these kinds of thoughts before, such as when the US began experiencing insulin shortages. When COVID-19 arrived, he and Dr. van Meyel quickly called on their colleagues and formed the team. “This is a unique specialization with the right people at the right time trying to make a difference,” says Dr. van Meyel.

Even so, making viral tests is a bit of a departure for these two. In pre-pandemic times, Dr. Schmeing, who is Associate Professor in the Department of Biochemistry, spent his time studying biosynthetic megaenzymes, while Dr. van Meyel, Professor in the Department of Neurology & Neurosurgery, was delving deep into neurons and glial cells. That’s all on hold for now, while they devote all their waking hours to the tests – apart from when they are fulfilling their teaching and administrative duties and on Zoom calls with their colleagues and lab teams.

The whole test project team are doing likewise. “It’s really amazing to see these McGill professors, researchers and students come together and make fantastic progress,” says Dr. Schmeing. “Everyone’s put their research on hold. It’s remarkable. The breadth of expertise in the CRBS is what allows us to do this. We have a great team of labs from Biochemistry (Drs. Albert Berghuis, Alba Guarné, Kalle Gehring, Bhushan Nagar, Jerry Pelletier), Pharmacology (Jean-François Trempe), Cell Biology (Susanne Bechstedt, Mike Strauss) and Biology (Gary Brouhard) whose laboratories are making and testing the enzymes. Drs. Masad Damha, Nathan Luedtke and Maureen McKeague from the Chemistry department are making state-of-the-art DNA components. Our expertise at CRBS is absolutely suited to this, but it’s not the normal way we use it.”

Put to the test

“This is not a brand-new test,” says Dr. Schmeing. “This is a Canadian version of the gold standard.”

The process of testing for SARS-CoV-2, the virus responsible for COVID-19 infections, is two-part. First, the RNA is extracted from the sample (usually a swab from a patient’s nose). “RNA extraction is a molecular biology technique that is fairly common, but it needs to be done under clean conditions with high throughput,” explains Dr. Schmeing.

Second, RT-PCR detects the presence of virus in the sample. This is an incredibly complex process where the team’s enzyme-building expertise really comes into play. RT-PCR involves a delicate balance of almost 20 components that must come together to make a robust, functioning test.“We are creating both parts at the 15,000 test level. We will scale RT-PCR to the national level in partnership with the NRC.”

“Things are going great,” says Dr. Schmeing. “The enzymes are working well, and the probes and primers are working well.” Optilab Montreal MUHC, a designated COVID-19 testing lab, has been verifying the team’s reagents and the components for the RT-PCR in a real world setting against known positive and negative tests.

“The leaders of the microbiology labs at Optilab Montreal MUHC have been very helpful and supportive from the beginning, in particular Dr. Jerry Zaharatos and Dr. Raymond Tellier,” says Dr. van Meyel. Both are Associate Professors in the Department of Medicine. Once the test is ready, the first 15,000 pilot tests will be supplied for use to Optilab MUHC. “Under current testing, that’s about a week’s worth of tests,” explains Dr. van Meyel. “When things are up and running, we’ll be able to produce tests at this level for McGill’s affiliated hospitals as long as they’re needed.”

Meanwhile, the pilot will also serve as a proof of concept for a potential ramp up to millions of tests in collaboration with the NRC. For that, the team is grateful to have been able to get a head start thanks to government scientist Dr. Luke Masson and his team at NRC Human Health Therapeutics (HHT), also in Montreal. “Dr. Masson recognized immediately that it was essential to get to work right away on the cell lines needed to take the project to the next phase,” says Dr. Schmeing.

Drs. Schmeing and van Meyel are in this for the long haul. “This is not just for the current pandemic,” says Dr. Schmeing. “This will also give Canada the infrastructure and resources to be in better position to deal with future pandemics because we now know how to do it. Now we can make the ingredients, and we have the recipe. The test is versatile and can help Canada respond quickly to other novel challenges to the health of Canadians.”

The full team of McGill scientists participating in the project can be found here. McGill administrators, the Deans of the Faculty of Medicine and the Faculty of Science, the office of the Vice-Principal (Research and Innovation), and the RI-MUHC ‎are providing important support for this initiative.

McGill’s CRBS is an FRQS-funded centre focused on structural biology and biophysics for health.

The CTB at the RI-MUHC is a driver of innovation in fundamental biomedical research.

Congratulations to those two hockey buddies and whole team at the McGill Science lab … well done!NEXT?

Congratulations to Dr. Schmeing and Dr. van Meyell and their team for developing a RT-PCR test! This will not only make Canada self-sufficient in terms of SARS CoV-2 testing but will also support rapid testing responses to future public health challenges. Self-sufficiency for all essential supplies and services should be goal – it will provide Canadians with the autonomy needed to face future pandemics and will also strengthen our economic base and provide jobs.