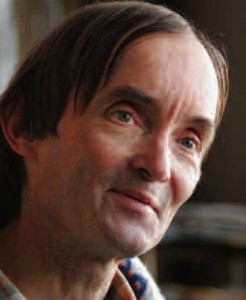 Although he had just been singled out as one of only nine outstanding Canadian researchers to be awarded a Killam Research Fellowship, physicist Robert Brandenberger, was quick to share the spotlight with the people who had helped support his work.

“I’d like to thank all of my collaborators and students for their help over the past years, and to thank McGill University for providing such a stimulating atmosphere to conduct research in,” he said via email from China. “I feel greatly honoured to have been granted a Killam Research fellowship.”

Killam Research Fellowships, considered among Canada’s most distinguished research awards, have a value of $70,000 a year and enable Canada’s best researchers to devote two years to full-time research. Prof. Brandenberger, who studies models of the very early universe that connect the theory of fundamental forces of nature with cosmological observations, said that the award will allow him to further his work. “This fellowship will provide me the chance to focus more intensively on the challenging research goal of trying to connect superstring theory as the theory which unifies all forces of nature with cosmological observations,” he said.

Denis Thérien, Vice-Principal (Research and International Relations) applauded the Canada Council for the Arts for selecting Brandenberger because his research “will have profound implications for our understanding of how the universe came to be.

“We are so proud that Prof. Brandenberger is among an eminent list of McGill scholars whose work is changing the way we see the world.”

The Killam Research Fellowships awards support scholars engaged in research projects of outstanding merit in the humanities, the social, natural and health sciences, engineering and interdisciplinary studies within these fields. The Killam Selection Committee, made up of 14 eminent scientists and scholars representing a broad range of disciplines, considered 79 applications during this year’s selection process. The Killam research Fellowships are made possible by a bequest from the late Mrs. Dorothy J. Killam.