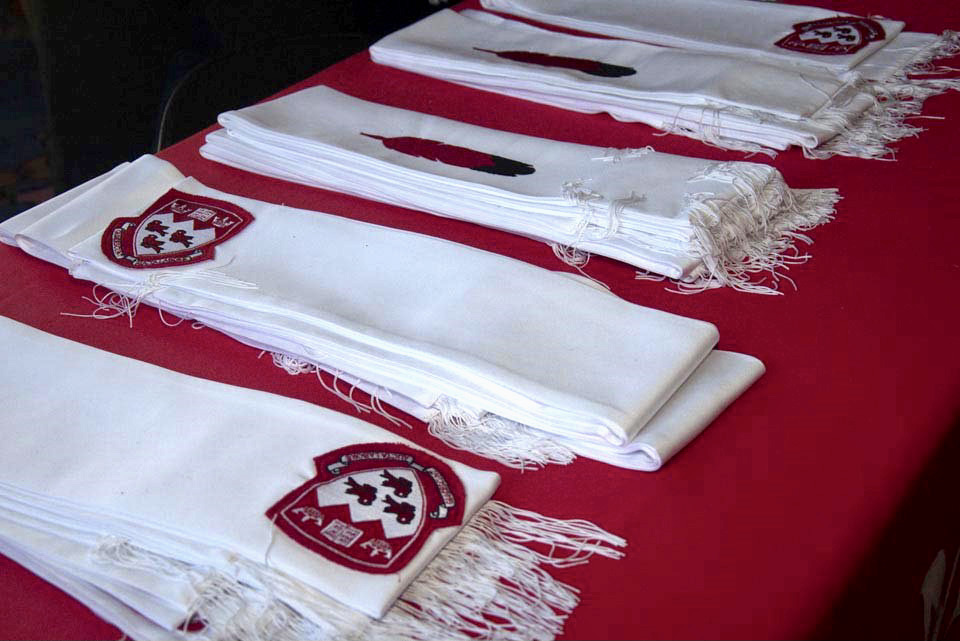 On October 25, as part of Fall 2022 Convocation, McGill conferred ceremonial scarves to 43 First Nations, Métis and Inuit students who have completed degree programs and certificates at both the undergraduate and graduate levels.

The virtual ceremony was hosted by First Peoples’ House, the School of Continuing Studies and the Office of First Nations and Inuit Education.

The scarves have been created by Kahnawake-based designer Tammy Beauvais and incorporate symbols important to Indigenous cultures. Red scarves are offered to degree recipients and white ones to diploma and certificate recipients.

McGill alumnus, Ben Geboe acted as MC for the ceremony. After welcoming people to the celebration, Geboe turned to Kahnawake Elder Kevin Ka’nahsóhon Deer for the Words Before All.

Words that Come Before All

Deer spoke of our connection to all creation – and the importance of taking the time to acknowledge and appreciate that connection.

“As I look around, we are all seemingly in good mind, good health, and good spirit. We ask ourselves ‘Why is that?’ It’s because we’re surrounded by love from our family and all of our relations. So, we acknowledge them,” said Deer, who graduated from McGill in 1996 with a Bachelors of Education in First Nations Education.

“We bring our minds together and we acknowledge that source of life for all life, and that we are able to gather at this particular time with good mind, good health, and good spirit,” he said. “These are some of the things we say in the Words that Come Before All. It’s all about having an attitude of gratitude. This morning we had the opportunity to open two gifts – our eyes. And here we are able to participate in this great and beautiful life again.”

The thread of gratitude was also woven through Angela Campbell’s address. The co-Acting Provost and Assistant Provost, Equity, began by expanding upon the land acknowledgement that is conducted before most McGill events.

“As McGill enters its third century, we are grateful for, and seek to honour the wisdom and guidance of the members of [the Haudenosaunee and Anishinabeg] nations who remain the traditional custodians of the lands and waters of Tiohtiá:ke, which today is known by some as Montreal,” she said.

“I also want to point out that McGill’s land acknowledgement must also extend beyond Tiohtiá:ke – from the traditional territory of the Inuit people in Nunavut, where McGill’s Arctic Research Station is located; and the Innu territory that hosts our Sub-Arctic Research Station in Schefferville; to the ancestral lands of the Taíno and Kalinago in Barbados, home of McGill’s Belair’s Research Station; to the Outaouais campus, located on the territory of the Anishinabeg Nation; and the Gault Nature Reserve in Mont St. Hilaire, which is located on Abenaki Territory,” said Campbell. “All of McGill’s teaching and research activities take place on Indigenous traditional lands and we wish to humbly express our utmost gratitude and respect for these peoples.”

Campbell also expressed her gratitude for the cohort of graduating students.

“While McGill has helped you to acquire new knowledge and skills, and to forge lasting relationships and friendships, I would like to emphasize also how much you have brought and contributed to your alma mater through your presence in our community, and your commitment, for which we are most grateful,” she said.

“In the years to come, not only will your expertise and skills enrich our society in many important ways, but, you are all inspiring role models for the First Nations, Métis and Inuit students who will follow in your footsteps.”

“I’m really delighted to be attending my first scarf ceremony at McGill in my new role as Associate Provost of Indigenous Initiatives,” Celeste Pedri-Spade told graduating students. “I am especially pleased to be with you and members of your family today to celebrate your hard-earned success.”

Pedri-Spade spoke about George Edward Bomberry, (Kanyen’kehàka, Six Nations), the first Indigenous student to graduate from McGill. Bomberry earned his MD in 1875, pre-dating the Indian Act by one year.

“I am reminded of the teachings by the late Alex Skead, who was a well-respected Elder in my home territory of Treaty 3,” she said. “He was a very vocal advocate for Indigenous education in his lifetime… He urged students to remember that education starts with the personal recognition that you enter the world not as an inadequate, unlearned person. Rather, the Creator placed you into this world as an intelligent, full person with all of the tools and gifts you need to live life to its fullest. The task is to seek out the relationships with the people and places that recognize these gifts and that will complement them and help you as you navigate the various roles in your life that you will take on.

“Today’s ceremony is part of McGill’s efforts to create and inclusive and open environment that celebrates and values Indigenous members of its community,” said Pedri-Spade. “It is a ceremony that honours the legacy of Indigenous students’ success that was started by one student almost a century and a half ago… Each of you is a source of inspiration and motivation for our University to continue on this path to ensuring that we create more opportunities for more Indigenous students to succeed here.”

Interim Principal Christopher Manfredi praised graduating students for their “hard work and perseverance in the face of different challenges.”

“Each of you are role models; you are paving the way for more First Nations, Inuit and Métis people to join us at McGill and to become the leaders of tomorrow,” he said.

“Continuing to increase the presence and success of more Indigenous students on our campuses is a priority for McGill – it is a goal that we put forward in our 52 Calls to Action and it is a commitment that we are determined to meet,” said Manfredi.

For his keynote address, Alex Allard-Gray, spoke of his own experience as a Science undergrad at McGill.

The Program Manager for McGill’s Indigenous Health Professions Program spoke about the challenges of coming from his community of 3,000 people to Montreal and McGill. Walking into his first biology lab, he encountered a group of students discussing their respective paths to McGill. Some were award-winners, others were valedictorians, and all had very high marks.

“I remember sharing with them my average grades and I got puzzled looks from two or three people. They asked me how I got into McGill because that wasn’t the average I needed to get in.  They seemed to be taken aback by that,” he said. “When I mentioned that I was Indigenous they said “Oh, OK.” They just accepted it. Within a week of being here I was ‘othered.’

Allard-Gray didn’t complete that first semester. “I tried to take on this institution as an individual and I fell on my face,” he said.

Instead, he went back home, which proved to be the right thing to do.

“One of the things that really pulled me back into my education was reconnecting with my community, my family, my support systems,” said Allard-Gray. “It was the driving force I needed to get back into academia, to come here and recognize the support that was required to finish my studies.”

“Today I recognize not only the sacrifices that you made, but I see some family members in the room as well. And I want to thank …  the loved ones who have supported you. When I was a student one of the biggest factors for me finishing my studies was the support I had, whether it was from my family back home, my peers, or the support that First Peoples’ House gave me,” said Allard-Gray. “I want to thank each and every one of the family members who are here today for the support you’ve given for the students. It makes the process that much easier.”