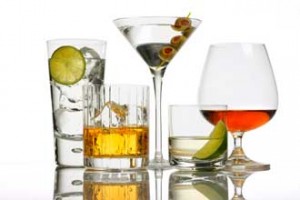 Bertrand Russell once described drunkenness as “temporary suicide,” a phrase that might turn out to be more literally true than the great philospher knew.  Heavy drinkers of beer and spirits face a much higher risk of developing cancer than the population at large, says a group of Montreal epidemiologists and cancer researchers. Their findings show that people in the highest consumption category increased their risk of developing oesophageal cancer sevenfold, colon cancer by 80 per cent and even lung cancer by 50 per cent.

In all, the researchers found statistically significant relationships between heavy consumption of beer and spririts and six different cancers. Moderate drinking (i.e. less than daily) and wine consumption did not show the same effects, however.

“We looked at the data in two ways,” said Benedetti, an assistant professor at McGill’s Departments of Medicine and of Epidemiology, Biostatistics and Occupational Health. “We compared people who drank heavily to our reference group, who abstained or drank only very occasionally. We also looked for trends across our categories:  non-drinkers, weekly drinkers and daily drinkers.

“This study crystalizes many strands of evidence from different studies on different types of cancer and alcohol consumption,”  said Dr. Jack Siematycki, professor, Canada Research Chair and Guzzo Chair in Environment and Cancer, at the Université de Montréal.

The researchers used data originally collected for a large occupational cancer study conducted in Montreal in the 1980s. The information was a treasure-trove, said Benedetti.

“Lifetime interviews were conducted with people about their job histories, and detailed information about all the things they could have been exposed to was collected,” she explained. “As it turns out, the data also included information about non-occupational factors such as drinking alcohol, smoking cigarettes, diet and socio-economic status, among others.”

Benedetti, the study’s lead author, conducted this research while still a postdoctorial fellow under the supervision of her co-authors, Dr. Siemiatycki and Dr. Parent. Their results were published in the current issue of the journal Cancer Detection and Prevention.

“For the most part we showed that light drinkers were less affected or not affected at all,” said Benedetti. “It is people who drink every day or multiple times a day who are at risk. This adds to the growing body of evidence that heavy drinking is extremely unhealthy in so many ways. Cancer very much included.”

Child marriage is legal and persists across Canada

Climate change: Threshold for dangerous warming will likely be...