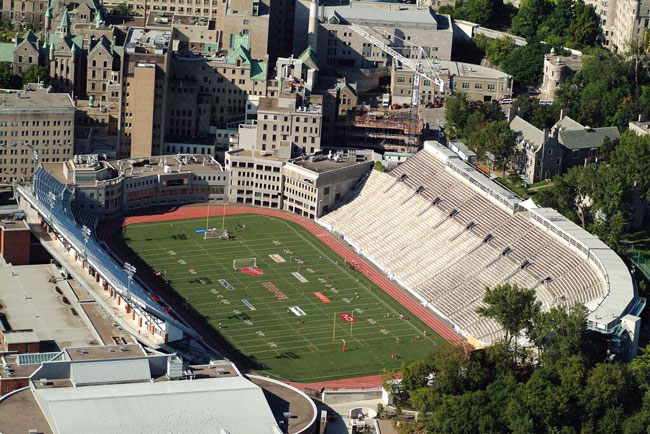 By Jill Barker and Earl Zukerman

This week marks the centennial celebration of Percival Molson Memorial Stadium and that event will be recognized with a commemorative souvenir coin given out to the first 1,500 fans in attendance at the Homecoming football game between McGill and Concordia, for the Shaughnessy Cup, on Saturday, Oct. 24. Kickoff is slated for 2 p.m. and the contest will be televised live on the French-language TVA Sports network.

The first event at the Stadium was a sports program held by the McGill Canadian Officers Training Corps auxiliary battalion on Sept. 18, 1915 but the venue was formally inaugurated on Oct. 22, 1915 with the firing of a starting pistol in front of 4,000 spectators at an intercollegiate track meet. At the time, McGill principal Sir William Peterson officially christened it as McGill Graduates Stadium but four years later, it was rededicated in honour of the late Capt. Percival Molson, a war hero who was the first McGill athlete to compete at the Olympics, having participated at the 1904 Summer Games in St. Louis.

A century later, the venue has as storied a past as any Montreal landmark. And while other historical stadiums across North America have been torn down, Molson Stadium is still true to its original mission, which was to serve the McGill athletics community.

Built on land donated by Sir William Macdonald in 1911, a committee of McGill graduates assembled in 1913 with the task of erecting a stadium in what was then known as Macdonald Park. The Stadium Committee was championed by Percy Molson, who graduated in 1904 with an arts degree. A former captain of the McGill hockey team, he was also a track star, racquet sports enthusiast and a football player. He was inducted posthumously to the Canadian Football Hall of Fame in 1963 and was an inaugural honouree to the McGill Sports Hall of Fame in 1996.

After graduation, Percy Molson became the youngest member to serve on the McGill Board of Governors, chairing its Finance and Stadium committees. While serving in Word War I, he rose to the rank of Captain and was severely wounded overseas in the Battle of Sanctuary Wood on June 2, 1916 and received the Military Cross for gallantry and distinguished conduct in action. He insisted on returning to action and was killed by a direct hit from a trench mortar on the outskirts of Avion, France on July 5, 1917. He bequeathed $75,000 in his will to offset the costs associated with the project. In recognition for his monetary assistance and his role in leading the committee responsible for building the venue, it was renamed Percival Molson Memorial Stadium in 1919.

With a $75,000 loan obtained from the University, construction began in July 1914. The estimated cost of the stadium in that era was $93,000, but plans to sell the excavated stone for $36,000 put the net estimated cost of construction at $57,000. McGill graduates contributed to the Stadium fund and secured the loan in their name.

The stadium was slated to open in the fall of 1914, but World War I led to a change of plans and completion was delayed until the fall of 1915. Designed by Percy Erskine Nobbs, a McGill professor of architecture, the concrete structure initially had a seating capacity of 8,000 with stands only on the north side of the field and a natural grass playing surface encircled by a quarter mile (400m) cinder track. Space was left around the stadium in anticipation of additional seating.

Over the last 100 years, the Stadium has seen its share of changes. The first expansion in seating occurred in 1921 and outdoor lights were added in the 1930’s, making it the first Canadian stadium to illuminate night events. During the 1930s, a herd of sheep was once brought in to improve the grass. A popular place to watch sports in the 1950s and ’60s, further expansion enabled the McGill Redmen and the Montreal Alouettes to fill the stands with capacity crowds. With additional expansion and facility upgrades in the 1970s, 1990s and 2000s, today Molson Stadium seats 25,012 spectators.

Also notable is the evolution of the venue’s playing surfaces installed during its history, initially with grass back in 1915 at the then-pricey cost of $2,500. Six decades later came the installing of AstroTurf in 1975, followed by a million-dollar AstroTurf-8 surface in 1988, a FieldTurf carpet in 2003 and most recently, FieldTurf Revolution in 2013 was installed at a cost $1.445 million.

The Stadium has also seen its share of international and national sporting events. It was the principal venue for field hockey during the 1976 Summer Olympic Games, also hosted the CONCACAF women’s under-19 qualifying soccer tournament in 2004 and welcomed a charity soccer game in 2009 featuring an international line-up of European professionals including French soccer star Zinedine Zidane. A favourite locale for football teams from the NFL, CFL, many Canadian university teams, along with CEGEP and high school squads have graced its field. The 1931 Grey Cup, 1957 CFL All Star Game and the 2014 Vanier Cup all took place here.

The Stadium has also hosted several high-profile cultural events over the years including performances by New York’s Metropolitan Opera House, the Montreal Symphony Orchestra, rock bands The Police (1980) and the Beach Boys (2001) as well as a RHR Black Watch ceremony presided over by the Queen Mother. In 1951, Princess Elizabeth, who later went on to become the queen of England, toured the Stadium. The venue was a frequent host to McGill convocations in the 1960s and accommodated the landing of a helicopter delivering a heart for transplant at the nearby Royal Victoria Hospital.

Also utilized by McGill’s large intramural community and Summer Sports Camp, the Stadium’s most recent renovation in 2010 cost $29 million, a far cry from the $142,460 in expenses incurred during the original construction, a number that was knocked down to $33,976 after Molson’s legacy and the sale of 3,000 tons of excavated stone was taken into account.

Thanks to financial assistance from municipal, provincial and federal governments, the Montreal Alouettes’ owner Bob Wetenhall and the students of McGill, Percival Molson Memorial Stadium is just as vibrant today as it was a century ago. The McGill community embraces and celebrates its history and looks forward to another 100 years of welcoming athletes from around the world.

By the time I went to McGoll in the late 80s the place was falling apart, especially the North stands. But that didn’t seem to matter because I think for most of the games I went to there would be about 2-3000 people there (almost all in the Sourh stands). Yet the place was built for many more people, and the old photos show that the place was packed for games in the 30s, 40s & 1950s. Where did all the fans go? I know that since the Allouettes moved back in the place is now spruced up quite a… Read more »