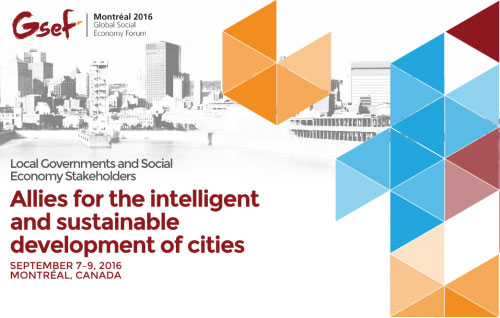 By Isabelle Péan, Director, Innovation in Practice, Office of Innovation and Partnerships

The third annual Global Social Economy Forum (GSEF2016) was held from Sept. 7 to 9, at Montreal’s Palais des Congrès. More than 1,300 participants discussed collaboration between local governments and social and solidarity economy actors for the development of our cities. More 60 countries and more than 30 mayors expressed a visible commitment to Social and Solidarity Economy (SSE).

Multiculturalism and diversity were at the forefront. Ghislain Picard, Chief of the Assembly of First Nations of Québec and Labrador, began his speech in his native language, reminding us that we are on Mohawk territory. His message was positive, calling on everyone to work together if we really want to develop a better society. People from as far away as Africa and South America trumpeted SSE as part of the solution. A representative from Bolivia attended wearing traditional clothing. Having just visited her beautiful country a few weeks prior, I had a greater appreciation of our conversations (in my broken Spanish).

The key message was to continue to innovate and collaborate all together. Jean-Martin Aussant, executive director of Chantier de l’économie sociale, was part of a group that announced very good news for the Montreal community: the Maison de l’innovation sociale (MIS) will aim to bring together entrepreneurs, citizens, academics, technology experts and investors across the province of Quebec with the purpose of maximizing the collective impact of initiatives for equitable and sustainable development.

Aussant explained that the social economy is not a sector of activity but a form of entrepreneurship that could be called a collective entrepreneurship. The creation of innovative partnerships between businesses, institutions of higher education, civil society organizations, foundations and public authorities will allow the MIS to offer access to the best expertise, competencies and training available, and to move from idea to impact. Drawing on existing achievements in the field, MIS will reinforce synergies between local, regional, national and international organizations and strive to support social innovation initiatives. The MIS will be operational at the end of 2017.

Quebec is a strong leader in social economy, with more than 7,000 organizations and many initiatives that have put the province on the front page internationally.

But what about SSE and our cities? We know that the number of people living in cities will double in the foreseeable future, and these cities will become the driving force of the global economy. As Montreal Mayor Denis Coderre said, we have to think global but act local. That being said, how we can build cities that work? How can we make sure that our new policies are not creating more social inequities?

Over the three-day forum, we were given examples from all over the world showing that while cities sometimes create problems, they also create solutions. From cities in Brazil and Greece that currently face major crises, to other cities as avant-garde as Mondragon, Lille and Seoul, we got a glimpse of many amazing community-led initiatives that have had a strong impact.

“The social economy is a great antidote for all these crises we are going through,” said Antoinette Guhl, Deputy Mayor of Paris. She is in charge of the city’s social and solidarity economy, the circular economy and social innovation. “It is also a beacon of hope, namely for youth… One student in two wants to get involved in social economy.”

Many people agreed that one of the key factors for success in SSE is the ability to develop multi-partner initiatives. It is sometimes difficult to duplicate innovative initiatives since they are strongly linked to their local specificities. Thus it is important to develop processes with multiple partners and to make sure everybody is deeply involved and committed throughout the process. We will need to scale all these initiatives and develop global approaches that involve local governments. But this will be feasible if we give ownership to our stakeholders and are attentive to the importance of dialogue and conversation. Morocco is an interesting example, where citizens have earned the right to be part of the governance of the city and rules were changed when needed.

On a national scale, the Honorable Jean-Yves Duclos, the Canadian Minister of Families, Children and Social Development, announced the creation of a new steering committee for revitalizing SSE and defining the orientations of the next Canadian Strategy on SSE. Details will be announced in the next few weeks.

Although it was difficult to see growing social needs and the widening gaps between the haves and the have-nots, I left optimistic after this forum, seeing that measures are being taken and that many community stakeholders including younger generations are willing to invest their time, funding and expertise in order to improve the quality of life of so many people.