It rained, of course, as it feels like it has done virtually every day this soggy summer of 2017, but the sprinkles didn’t dampen the enthusiasm of dozens of people who gathered for a pleasant ceremony to unveil one of the largest projects celebrating the City of Montreal’s 375th anniversary this year: the 3.8-kilometre Promenade Fleuve-Montagne, a pedestrian pathway linking the St. Lawrence River and Mount Royal that slices through the heart of McGill’s downtown campus.

Under the cover of a couple of fabric shelters, the crowd sipped lemonade, listened to a jazz trio and munched on hors d’oeuvres before Réal Ménard, standing in for Montreal Mayor Denis Coderre sang the project’s praises and took aim at media reports that have maintained the project is more than $10 million over its original $42.4-million budget, as well as noting that it was completed two months late.

Ménard, who is mayor of the Mercier-Hochelaga-Maisonneuve borough and the member of the City’s Executive Committee in charge of sustainability, the environment and major parks, insisted the total cost is only $45.6 million.

The most spectacular part of the promenade is surely the section that runs north from Sherbrooke Street up to the mountain on McTavish Street. Decorative paving stones, planters of various shapes and sizes, a variety of benches and other decorative touches including gardens have transformed the street and offered a much nicer approach to the intersection with Dr. Penfield Avenue, which divides Upper and Lower McTavish.

“I am very happy and touched to take part in this inauguration ceremony to celebrate with you the official opening of this magnificent Promenade Fleuve-Montagne,” said Louis Arseneault, Vice-Principal (Communication and External Relations), who was standing in for Principal Suzanne Fortier. “This is an important moment for Montreal, for Montrealers, and for all who come to visit, whether to study work or enjoy a vacation.”

Arseneault noted that in addition to the two iconic ends of the pathway, the river and the mountain, there lies a third iconic feature: the McGill campus.

“For almost 200 years, McGill University has been a landmark in Montreal’s downtown landscape,” he said. “Its unique heritage buildings and its beautiful green spaces are a treasure that Montrealers and visitors alike can enjoy every day. This Promenade makes them even more accessible and integrated to the city’s fabric.”

Ménard explained that the path, which begins near the Pointe-à-Callière Museum of History and Archaeology at the site where the City was founded in 1642, reflects the history of Montreal and its artistic and architectural heritage – from artifacts of Indigenous people “who were there before us,” to the monument to the founders of Montreal, including Paul Chomedey de Maisonneuve and Jeanne Mance, to various merchants, including Henry Birks, the Hudson’s Bay Company and the Montreal stock exchange.

He described it as “an open-air museum.”

From giant Muskoka chairs along McGill College Avenue, to the benches on McTavish (as well as the McGill students’ Farmer’s Market, which is located in front of the University Centre and the Brown student services building near the intersection of Dr. Penfield)  there are plenty of places for people to pause and soak up (if that’s appropriate terminology this summer) their surroundings.

More information about the project can be found on its websites in French and in English. 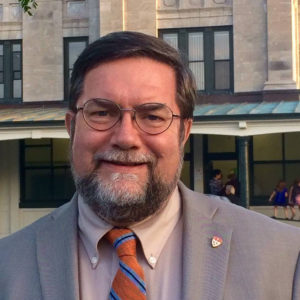 Doug Sweet, Director, Internal Communications
Doug has spent more than 10 years at McGill, first as Director of Media Relations and, for the last six years, as Director of Internal Communications, the office that produces the McGill Reporter. Prior to his arrival at McGill in 2008, Doug spent 30 years in print journalism as an editor and reporter at newspapers and magazines in Ontario, Alberta and, for 23 years, at The Gazette in Montreal.
More from Doug:
1 Comment
Oldest
Newest Most Voted
Inline Feedbacks
View all comments

A wonderful project to maintain the history of the city and the splendor of the McGill campus. I cannot wait to experience the Fleuve-Montagne pathway on the campus, whenever I am back to visit Montreal and the McGill campus.
K. Abramovitch
Redlands, California