Starting in October, McGill undergraduate and graduate students will enjoy an annual Fall Reading Break (FRB). Like the existing Winter break, the new FRB will allow students to catch up on their work, provide extra study time, maintain their mental and physical wellness, and rest. 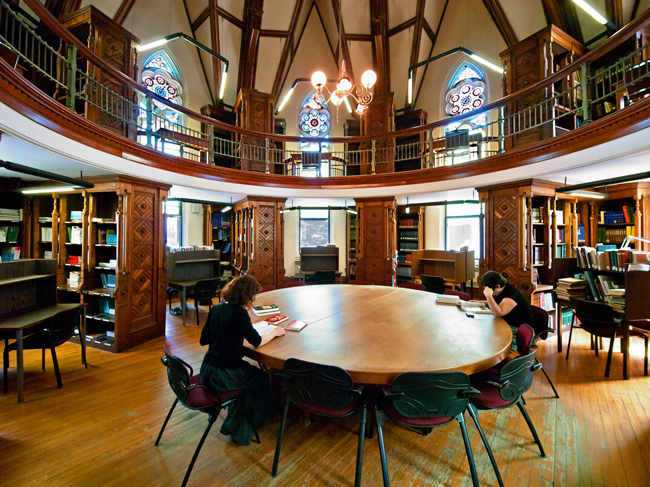 The creation of the FRB follows years of extensive cross-campus consultation and close collaboration. Bryan Buraga, who was president of the Students’ Society of McGill University (SSMU) in 2019-20, said he was “extremely pleased that we were able to bring about an FRB in collaboration with administrators, key staff, and students.”

The inaugural FRB will be Saturday, Oct. 9 to Wednesday, Oct. 13, inclusive.

Buraga was the SSMU representative on the Enrolment and Student Affairs Advisory Committee (ESAAC), a standing committee with administrative responsibility for various student affairs, chaired by Deputy Provost (Student Life and Learning) Fabrice Labeau. In January 2019, ESAAC struck the Sub-committee on Fall Reading Break to examine different possible scenarios for how to implement an FRB, and to identify what trade-offs would be required to make it happen. The sub-committee included representatives from SSMU, the Post-Graduate Students’ Society (PGSS) and the Macdonald Campus Students’ Society (MCSS).

A fourth-year student in the Bachelor of Arts and Science program, majoring in Sustainability, Science and Society, Buraga says the resulting FRB “strikes the right balance between the needs of all members of the McGill community, and demonstrates how student-led advocacy on issues can lead to long-term, long-lasting positive change for the University.”

Students have advocated for a Fall break for some years, but the complex logistics of implementing it— a 13-week, three-credit course requires at least 39 contact hours, and academic programs must have 130 teaching days over the Fall and Winter semesters—required time for reflection and close coordination. Contact hours lost to an FRB would need to be somehow added back into the schedule by making lectures, or the semester itself, longer.

The SSMU held a referendum among the undergraduate student community in March 2018 to assess the level of support for an FRB. The students voted 96.6 per cent in favour of the idea.

Gillian Nycum, McGill’s Registrar and Executive Director for Enrolment Services, said that “in light of that [referendum], students were informed that we have to have a trade-off in order to maintain the contact hours in the Fall semester to make room for the FRB.”

Nycum noted that after the referendum, the sub-committee conducted “a feasibility analysis of whether it was possible to implement it in our schedule.” Early in 2019, the sub-committee concluded that the break was indeed possible, but added that further consultation was necessary “to capture a clear direction, a sense of consensus on the right way to do this.”

The sub-committee consulted deans and various staff members on the feasibility of the academic pause. Their feedback was captured in a memo that Deputy Provost Labeau submitted to Senate in May 2020.

In the fall of 2018, the SSMU held a second referendum asking undergraduate students which trade-off options they preferred. The compromises included starting the semester earlier, holding final exams on weekends, and having courses begin earlier in the morning and going later into the evening. More than 75 per cent of students preferred the idea of maintaining the required number of contact hours by starting the semester earlier.

The sub-committee then did “a much deeper dive into the issue,” Nycum said, consulting deans, associate deans, faculty councils, department chairs and administrative staff “to ensure that we catalogued the implications of implementing the FRB.”

Although the COVID-19 pandemic delayed the process somewhat, the sub-committee was able to make its recommendations to McGill’s Senate in May 2020. Senate approved new guidelines for setting the academic calendar dates while maintaining contact hours.

“The sub-committee decided to take a balanced approach by making space in the calendar for the FRB by starting the Fall semester earlier by the fewest number of days possible,” Nycum said. “We coordinated with Student Services around Orientation week, and worked to avoid [shifting the dates of] residence move-in weekend up one week” to minimize any inconvenience to students. Because Labour Day isn’t a fixed date, the Fall semester has traditionally started anywhere from Sept. 1 to 6, and in some years before Labour Day. Under the revised academic calendar, the semester could now start as early as the end of August. Fall 2021 will begin on Sept. 1.

Although the exact dates, and length of the break, will vary each year depending on the Labour Day wildcard, the FRB will always be an expansion of the Canadian Thanksgiving long weekend in October.

“Obviously, I would love for it to [always] be a full week,” said Kristi Kouchakji, the PGSS’s University Affairs Commissioner, “but this will still offer students at all levels a chance to catch their breath and reflect on what supports they might need or what tweaks to their work process they might want to make to have the second half of the semester go more smoothly, which is especially important for incoming students at all levels.”

The PGSS’s Kouchakji said that she is “very grateful that so many key administrators were willing to listen to what students were overwhelmingly telling them about the need for a FRB, and were willing to collaborate so closely with SSMU and to include PGSS and other stakeholders in the process as well. In particular, I’d like to commend Gillian Nycum and her team for making this work despite the many constraints.”

Kouchakji added that she is “continually in awe of the mobilization efforts SSMU puts forth on this and many other issues.”

U4 political science undergrad and SSMU VP Maheen Akter, who served on the sub-committee, said she is “thrilled that the Fall Reading Break has finally come to fruition, given the many years of advocacy and labour that have gone into it. I’m extremely thankful to all the students who have worked to implement it, including previous SSMU presidents Bryan Buraga and Tre Mansdoerfer.”

“The new break will be incredibly helpful for managing the workload of students and will allow for some alleviation of stress,” Akter noted. “I’ve very happy that students had such heavy involvement in both the sub-committee and in the work that led up to its conception.  As Kristi mentioned, there was significant and crucial buy-in from administrators like Gillian Nycum and the FRB would not be a reality without them.”

“It’s been a really great collaboration. The students have been with us every step of the way.”