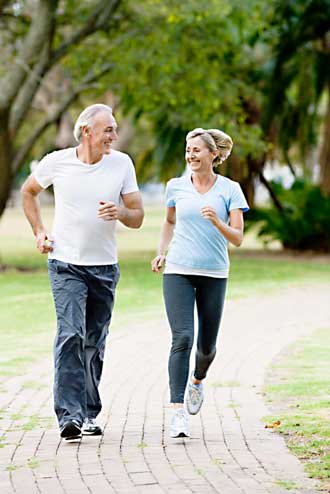 If a man and a woman of similar age walk up a steep hill side-by-side, the woman will most likely run out of breath faster than her companion. This is true whether they are healthy young or older adults, or if both suffer from a chronic lung disease. That’s because the smaller size of a woman’s lungs, her narrower air passages, and weaker respiratory muscles make breathing during exercise, quite literally, more work for her. A new study led by Prof. Dennis Jensen of McGill’s Department of Kinesiology and Physical Education explains why this is the case.

“What is novel about our study is that it’s the first to show that because of a woman’s relatively smaller size, when she is exercising, her brain needs to send stronger electrical signals to the respiratory muscles, and specifically the diaphragm, than does a man’s in the same situation,” Jensen say. “Our study shows that these differences are likely responsible for why women are more short of breath during exercise, even if it is just climbing the stairs.”

The study, published on Nov. 8, in the journal Experimental Physiology, was carried out by asking 50 healthy, non-smoking men and women between 20 and 40 years of age to ride on a stationary bicycle. During exercise, the participants’ cardiovascular, metabolic, breathing and breathlessness responses were carefully monitored. The researchers also recorded the electromyogram of the diaphragm (an index of the drive to breathe that presumably originates in the central nervous system) throughout exercise, using a special catheter positioned in the participants’ esophagus. These measurements were then analyzed and compared between men and women.

“These findings provide insight into why women with respiratory conditions such as chronic obstructive pulmonary disease are more short of breath and have lower health-related quality of life than men with similar conditions,” says Jensen, Director of McGill’s Clinical Exercise & Respiratory Physiology Lab (www.mcgill.ca/cerpl). “Researchers could use this information to explore ways to identify new treatments to relieve the symptom of breathlessness and to improve exercise capacity in both health and disease.