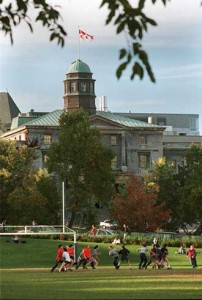 McGill’s downtown campus has been presented with a Certificate of Excellence in geotourism. The campus was recognized by the Geotourism Council of Montreal and the National Geographic Society as a distinct location respecting the values of geotourism, defined as “tourism that sustains or enhances the geographical character of a place – its environment, culture, aesthetics, heritage and the well-being of its residents.”

The certificate was handed out at the unveiling of a new MapGuide published by the National Geographic Society’s Centre for Sustainable Destinations and the Geotourism Council of Montreal.  It is National Geographic’s first urban Mapguide with the focus on geotourism. McGill’s downtown campus and Redpath Museum are among the map points featured in the new MapGuide, which will be distributed locally by Tourism Montreal at information centres and at businesses featured within it.