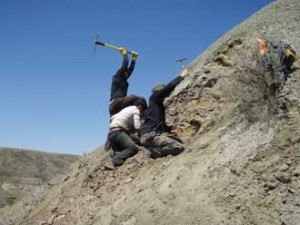 Huge tractors and seeders are parked along the gravel range roads in southern Saskatchewan. It’s the middle of May, the snow is gone except for a few patches left in the valleys, and farmers are getting their crops into the ground for this season’s harvest. I’m doing kind of the same thing. I’ve got fifteen students in tow, piled into pick-up trucks and cars, bouncing along the same gravel roads to get from our camp to the badlands to explore for fossils and learn about the natural history of this place. The name “badlands” refers to the fact that those lands can’t be farmed and usually make poor grazing grounds because they lack most things green. But their steep rock faces and constant erosion make them tasty fodder for me and my students.

Some of these students have never been west of Toronto. This year we even have three students from Colombia and it’s their first trip to Canada (and to -10C nights in the middle of May!). Many students haven’t camped much before either judging from their “fresh-out-of-the-box” Canadian Tire tents. The course I’m leading is called the Vertebrate Palaeontology field course (BIOL 573). That’s short for sedimentary geology, prospecting, palaeobiodiversity analysis, and diggin’ dinosaurs. The crash course takes us through what I think is one of the most important 300,000 years of Earth’s history – the late Maastrichtian stage of the Late Cretaceous period. The top of this time sequence is capped at 66.07 +-0.02 million years old. This is the era of such famous dinosaurs like Tyrannosaurus rex and Triceratops and a slew of others, birds, crocodiles, turtles, lizards, other now extinct reptiles, small mammals, salamanders, fishes, and plants. The fauna and flora are rich and the geology tells us they were living on an enormous floodplain on the northern shores of an inland sea that opened into today’s Gulf of Mexico.

After driving for an hour on the gravel roads striping the Saskatchewan plains, we abruptly drop into the badlands. My students gasp and I admit that the change in landscape is indeed amazing. Going from thousands of square kilometres of flatland prairie into the hundred metre deep steep canyons is an incredible feeling. The plants change, there are fewer and these plants are unusually pointy, the animals change, there are only a few birds of prey, jackrabbits, and ticks along with the odd scorpion and rattlesnake. In terms of the climate, some days will climb above 30C in May. Badlands indeed!

The first goal is to get a taste of the rock from the bottom of the valleys to the top. To understand the sediments in the hills, we bash them open, look at them with a hand lens, and pop a piece into our mouths to see how much clay is present in the rock. The grain size and shape of the sands and amount of clay in the rock tells us how fast and roughly how far the waters were depositing these rocks, millions of years ago. I always get complaints at this point – students whine, “But do we have to?” “Try it, and you just might like it.” I reply, as though I’m reading Dr. Seuss’ Green Eggs and Ham.

A few hours later we’ve hauled our gritty teeth to the top of the badlands and pause to rip a larger hole into the hill. We’re looking for a particularly interesting yellow-red clay layer only about a centimetre thick. We find it, and I pull out chunks and invite everyone to “taste a piece of history, taste the K-T.” Everyone eagerly devours the clay because they know the significance of this rock. This rock is filled with iridium and microtectites. This rare earth element and shocked glass spheres have come all the way from the Yucatan Peninsula from a meteorite about 20 km wide travelling at approximately 120 km/second, that smashed into the Earth at a near direct hit and dug out a crater about 180km wide and 40km deep, 66.07 +-0.02 million years ago. The smoking gun for the mass extinction that killed off approximately 75 per cent of all life then, including dinosaurs (except for birds of course).

Over the next couple weeks, we hike up and over large areas of badlands, chopping out tons of rock to collect dinosaurs (and everything else we find), travel hundreds of kilometres to work from Eastend (near the southwest corner of the province) to Grasslands National Park (on the southcentral border of the province), and then onto the famous badlands in Dinosaur Provincial Park in Alberta. Our work near Eastend is in collaboration with Tim Tokaryk and Wes Long of the Royal Saskatchewan Museum and the folks at the T. rex Discovery Centre.

The trip retraces a portion of the route that George Mercer Dawson, son of McGill’s famed principle, Sir John William Dawson, took in the early 1870s while surveying the Canada-US border. On that trip, he collected Canada’s first dinosaur fossil in what is now part of Grasslands National Park. So, our return to the region to collect dinosaurs is coming full circle. This year’s trip was a good haul. We collected a part of the back end of a very juvenile T. rex skull, finished up a juvenile duck-billed dinosaur quarry, collected about 500 pounds of well preserved plants (more rare than dinosaurs in these rocks), and about a ton of sediment filled with microfossils (small teeth, fish scales, and bones from a wide range of animals). These fossils are all destined for a larger research program in my lab that estimates the regional biodiversity just before and after the K-T extinction. Two of my grad students, Emily Bamforth and Matthew Vavrek, will spend the rest of the summer sorting and studying the micro and plant fossils. The task of “muling” out these prizes falls on all our shoulders – packed in Rubbermaid boxes and canvas bags. This last chore is as important a part of the course as the rest because so much of paleo fieldwork is primitive, manual labour.

It’s primitive because of the tight budgets associated with palaeontology. We also need to be near our localities, and since they are remote, our camps are too. Our camps are usually along streams that constitute our only running water and also serve as wash basins and beer coolers. And there is a certain sense of calm sitting around a fire that just cooked the meal you’re eating, drinking cool beer, being unplugged from phones and email, and chatting about dinosaurs long into the night.

Hans Larsson is an Associate Professor in the Redpath Museum and Canada Research Chair in Macroevolution.