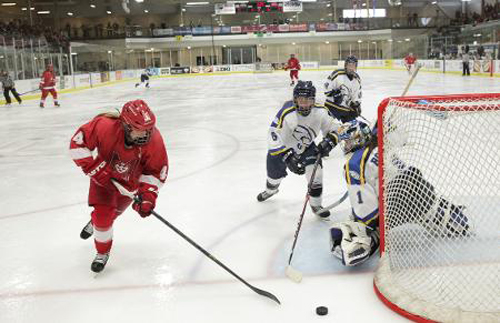 FREDERICTON – High-scoring sniper Gabrielle Davidson continued her assault on goaltenders, scoring twice and adding a couple of helpers as the fifth-seeded McGill women’s hockey team manhandled No.3 Moncton 8-2 at the Grant Harvey Centre in Fredericton, Saturday, punching their ticket to a berth in the Scotiabank CIS national championship game.

The Martlets, who improved to 2-0 in the six-team tourney and 27-11 lifetime at Nationals, will be making their seventh appearance in the gold medal affair, which is slated to be televised live on Sunday by Sportsnet. Puck drop is 5:30 p.m. (Eastern). McGill, which previously won the national title in 2007, 2008 and 2011. will meet the winner of Saturday night’s late game between the top-seeded Montreal Carabins (1-0) and sixth-seeded St. Thomas (0-1).

Barring a major upset, a Montreal-McGill final would be the ninth confrontation of the season between the bitter rivals. McGill owns a lifetime record of 31-7 against the Carabins but the two Quebec conference finalists split their eight meetings (4-4) this season, with the Martlets winning three of five during the regular season to finish atop the RSEQ standings. But the Carabins claimed two of three post-season affairs to capture the RSEQ crown for the second straight season.

McGill had a lopsided 36-13 edge in shots, including a 16-4 advantage in the opening period. The led 4-1 after the opening stanza and 6-1 after two.

Martlets head coach Peter Smith said the game was still valuable, despite it being a blowout.

Davidson, who has a tourney-leading 4-2-6 record in two games, was one of five McGill players to register a multi-point game. Chelsey Saunders, Brittney Fouracres, and Katia Clement-Heydra each had a goal and two assists, while Leslie Oles tallied once and set up another.

Moncton’s Elisa Savoie opened the scoring on the Aigles Bleues’ first shot of the game at 8:28. But Davidson answered right back, scoring only 46 seconds later, with Mcgill’s first of eight consecutive goals. Stefanie Pohlod potted a power-play effort at 15:12, followed by two more from Chelsey Saunders and Jordan McDonell, 22 seconds apart. Moncton yanked goalie Gabrielle Forget after the four-goal ouburst and sent in Emily Bouchard. Shots favoured the Martlets 16 to 4.

McGill started the second period with a 38 second power-play, but didn’t need it all. Brittany Fouracres scored 17 seconds into the period and Leslie Oles grabbed the Martlets’ sixth goal. Moncton put forth a good effort but simply couldn’t match McGill’s speed. The final few minutes of the period included mostly 4-on-4 play, as each team kept drawing infractions as their original penalties expired. Moncton only doubled its shots to eight, while McGill tallied 23 after 40 minutes.

McGill’s Oles said the team plays to win, no matter the score.

“We had our foot on the pedal the entire time and we were just focusing on the details and trying to stick to our game plan,” she said. “I think our entire team showed up today and I think that reflected on the scoreboard.”

Moncton will play in the fifth place game Sunday morning with the opponent to be determined. Moncton lost its first game against Laurier 6-0.

Aigles Bleues head coach Denis Ross said his team will still have energy in their final game, despite how their previous matches turned out.