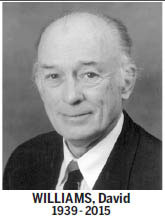 Born in Boston, he studied at Boston University and the Pontifical Institute of Medieval Studies at the University of Toronto. From 1967 to 2006 he was professor of English at McGill University (thereafter emeritus), a career that included a decade as Chairman of English (1979-1989), and periods of service with the Canadian Association of University Teachers (CAUT) (1976-1977) and the McGill Association of University Teachers (MAUT) where he served as President (1992-1993). He helped to found the Catholic Studies program at McGill, and served as the first Kennedy Smith Chair of Catholic Studies (2000-2002). From 2004 to 2011, he taught at Ave Maria University in Naples Florida. He was the author of five monographs, including Deformed Discourse: The Function of the Monster in Medieval Thought and Literature (1996), which was awarded the Raymond Klibanksy Prize (now the Canada Prize in Humanities). In 2002 France named him Chevalier dans l’Ordre des Palmes Académiques.

An enthusiast by disposition and a lover of nature, outside of his academic work he pursued his interests in orchids and other plants, aquarium fish, and birds. With his family he enjoyed several trips to Italy, and spent fifty happy summers at the cottage he built on Cape Cod.

His family extends heartfelt thanks to everyone who cared for him throughout his illness: the many doctors, nurses, and staff of the Montreal Chest Institute, the Service regional de soins à domicile pour maladies pulmonaires chroniques of the Maisonneuve-Rosemont Hospital, the CLSC Cavendish, Mount Sinai Hospital, and the Palliative Home Care Service of Mount Sinai Hospital.

Donations may be made to the Montreal Chest Institute Foundation (MCI) or the Christian Children’s Fund of Canada.