Members of the McGill, Montreal and Indigenous communities gathered Thursday, Sept. 22, on lower campus for the official launch of the Provost’s Task Force on Indigenous Studies and Indigenous Education.

This coming together was fitting because, in the words of Provost Christopher Manfredi, the establishment of Task Force is part of his long-term goal to “increase Indigenous presence at McGill among students, staff and faculty, and to expand our relationship with the Indigenous communities locally and across Canada.”

As part of that increased presence, the Hochelaga Rock had been relocated from its traditional spot on the lower field on Sherbrooke Street, to a much more visible location directly across from the James McGill statue earlier this summer. “The Task Force, the moving of the Hochelaga Rock, the recognition of the history of this site – these are steps in a much longer journey that began long before I became Provost and which will require continuous effort by all of us to reach its final destination,” said Manfredi, standing at a podium installed directly behind the Rock.

The Task Force was inspired by, and is mandated to go beyond, the Truth and Reconciliation Commission (TRC) of Canada’s calls to action. The Task Force will be animated by two core themes: recognition of Indigenous history, contemporary presence, and ways of knowing and learning; and reconciliation, specifically through educational and institutional efforts aimed at redressing historical legacies of injustice and restoring relationships with Indigenous peoples.

Addressing the crowd, the Provost outlined the five questions that the Task Force will focus upon:

The Task Force will submit a preliminary progress report to the Provost in January 2017, followed by a final report on its findings and recommendations by June 1, 2017. The Provost will present the final report to Senate in Fall 2017, at which time the report will be made publicly available.

“This is a very important step in working with highly committed people who will, with us, build a plan for the future to make indigeneity in the life and activities of the University more present and to enhancing the presence and success of Indigenous students, faculty and staff on our campus,” said Principal Suzanne Fortier. “We are looking forward to the [Task Force] recommendations so we can take concrete actions to accomplish those goals.”

Bright sunshine marked the day, reflecting the overall spirit of cooperation. Speaking to the crowd, Ellen Gabriel, human rights activist and former Coordinator of the First Peoples’ House, congratulated McGill for recent initiatives related to Indigenous issues. However, she warned that the day’s goodwill must be embraced even when future obstacles present themselves. “This is a relationship and relationships sometimes hit hard times,” said Gabriel. “But if we really care about it and if we really want that relationship to work then we will work through those difficult periods and we will be able to get beyond that.

“Indigenous pedagogy and methodology need to be incorporated into any indigenous studies program or into any kind of task force. It should be peppered throughout this University and every single faculty that exists at McGill because our methodology is land based, our methodology, like our identity, is land-based,” Gabriel said. “It is wonderful to see that this part of the University recognizing that this is the land of the People of the Longhouse. This is our land. We welcomed many other nations to this wonderful island as we continue to do so in these present times.”

Fittingly, the ceremony was held at the newly relocated Hochelaga Rock, the five-tonne granite rock that commemorates the 1535 meeting of French explorer Jacques Cartier and members of the fortified Iroquois settlement. “I can’t believe this has really happened, but it has,” said Michael Loft, a recently retired faculty member of the School of Social Work and a member of the Mohawk community at Kahnawake, as he looked back at the Rock with a smile. “The day has come.”

Loft gave the crowd a short history lesson, telling them that the Rock was originally installed just off Sherbrooke Street in 1920. “Back in the day, that was one of the best sites they could find. It was right front and centre,” said Loft. “But today in 2016, we continue to respect that event by moving the Rock out into the full sunlight once again… By recognizing that meeting long ago we are also highlighting a larger story of acceptance and goodwill that occurred so long ago.”

Loft recounted a story not found inscribed on the Rock’s plaque. He told of efforts of the Iroquois as they helped Cartier and his men survive their first harsh Canadian winter, offering them food and shelter and helping cure those who fell ill during the long transatlantic voyage. “By recognizing that meeting long ago we are also highlighting a larger story of acceptance and goodwill,” he said.

Seen in the light of the Truth and Reconciliation Commission, Loft said this fateful meeting almost five centuries ago should be the blueprint for everyone to follow in the future. “The big part of the story is what those natives did, that act of kindness. We must not forget that story,” said Loft. “That’s a good story. That’s a healing story. That’s a pivot point for us and let’s use it that way. Let’s get this ball rolling… Let’s push it further and further to see how far we can go to have better lives together.” 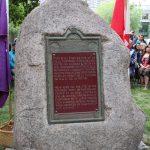 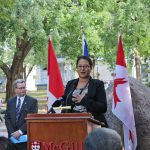 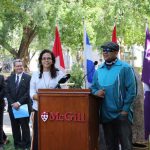 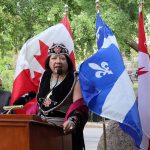 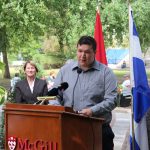 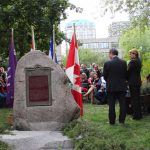 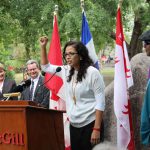 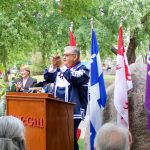