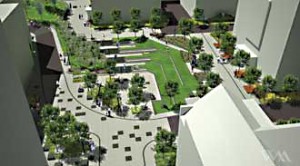 Planning, as Associate Vice-Principal (University Services) Jim Nicell would be the first to say, is not an exact science.

But it certainly can be interesting. Nicell held the attention of more than 150 people during an hour-long lunchtime information session summarizing McGill’s Master Plan for the future.

In summarizing the planning and design principles of the Master Plan, Nicell outlined nine broad “themes” governing all University initiatives. These guidelines include, among others, developing and maintaining open spaces; conserving the University’s heritage buildings; and investing in facilities that support excellence in research, teaching and learning.

He went on to highlight a host of construction projects both planned and in-progress. Chief among the big-ticket items is the proposed bioengineering building to be built on the Powell site on Dr. Penfield Ave. The 130,000-square-foot facility would serve stakeholders from across the University including the faculties of Medicine, Engineering, Chemistry and Science. Estimated cost: $120 million. “This gives you an idea. Master planning has to be a long-term process,” said Nicell. “I don’t have $120 million. I don’t even have $10 million toward this so far.

and secure the funding to make this a reality.”

Also high on the list of priority projects are the renewal of teaching labs and classrooms, renovations of buildings such as Lyman Duff, Bronfman, Stewart Biology and the McLennan-Redpath Library and the

development of open spaces such as the James Square project.

“When I entered this job after being here for 15 years, I had no idea just how big this university was,” said Nicell. “Well, we have two campuses, downtown and Macdonald, and we have some growth that is going to occur on the MUHC Glen campus when we have a research institute that is put in place. We have 228 buildings at 780,000 square metres – that’s roughly 8 million square feet. We’re the largest property holders on the entire island of Montreal.

“But I know it’s hard to relate to 8 million square feet,” said Nicell with a smile. “Just to give you an idea of the scale of our operations, we have 1,346

Outlining the basic principles of the Physical Master Plan, Nicell reminded audience members that the Plan itself is an “as we go” entity.

“I wish it was as simple as saying ‘Here is the Master Plan. This is what we’re going to be doing for the next 30 years.’ But clearly that’s not going to work,” said Nicell. “The Master Plan is a long-term process that has to be adaptable and flexible to changing needs and changing priorities and changing

opportunities over the course of time.”

And it isn’t just a case of building a new wing here or buying a property ad hoc. Big-picture decisions made regarding research, academic and enrollment planning have a direct influence on such things as property acquisition and disposal. “We have very specific goals in terms of teaching, research, larger contributions to the broader community and transmission of knowledge,” said Nicell. “The University will accommodate a carefully directed growth in enrolment, with a similarly focused adaptation and expansion of its

When discussing possible impediments, Nicell didn’t mince his words, referring to deferred maintenance – and its estimated $800-million price tag – as “THE major challenge of the University in terms of the physical development of its infrastructure.”

Nicell stressed the point that most of the financing for these projects comes from external funds specifically earmarked for facility upgrades, including $25 million a year for the next 15 years for deferred maintenance.

He also outlined the irony of the government’s Knowledge Infrastructure Program that, has committed $100 million for any number of McGill construction projects – provided they be finished by March 31, 2011 – an incredibly tight time-frame considering the project was announced just a year ago. The speed with which these projects must be finished is “unprecedented in the history of McGill University and probably unprecedented in the history of the construction industry,” said Nicell.